This week, Tennessee State Rep. Richard Floyd (R) introduced a bill that would punish trans people with a class C misdemeanor for using a bathroom or dressing room outside of one matching the gender on their birth certificate.

However, Sen. Bo Watson (R) withdrew the Senate version of the bill on Jan. 12, stating “we have more pressing issues before us,” signaling that Floyd’s crusade may still fail to find enough support from his own party to move the bill forward — despite the large Republican majorities in the state House and Senate. 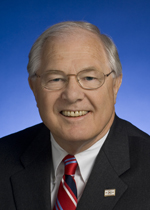 In a News Channel 5 interview, Floyd said the bill  — House Bill 2279 — would protect people like Natalie Johnson, the Texas Macy’s employee who contradicted store policy by refusing to allow a transgender woman from using a woman’s dressing room. Macy’s fired Johnson, who cited her religious beliefs for her discriminatory actions.

He then added that he would “stomp a mudhole” into any trans person who dared tried to enter a dressing room while his wife, daughters and granddaughters were changing, thus perpetuating the idea of a trans person as a bathroom predator.

Monica Roberts, a trans blogger who writes at TransGriot, points out that the language of the bill could affect androgynous and non-gender conforming cisgender people, too. She adds that the bill would affect not just Tennessee residents but any trans visitors who use an airport or interstate highway rest-stop bathroom while traveling through the state.

Marisa Richmond of the Tennessee Transgender Political Coalition said that in her organization’s view, if enacted, the bill would be unconstitutional: “For any gender non-conforming, or gender variant person, we see this as a violation of their Fourth Amendment rights against unreasonable searches and seizures.”

As the National Center for Transgender Equality estimates a national trans population between 1 to 1/4 percent, the bill could effect anywhere from 15,865 to 63,461 Tennesseans, in addition to those, as pointed out by Roberts, who could be impacted even if not trans.

WATCH Floyd talk about his bill, as posted by Think Progress: