Although the White House remains silent about the status of a proposed executive order to ban LGBT discrimination among federal contractors, some of D.C.’s leading LGBT advocates and lawmakers have been meeting to strengthen the case for and work out the details of the proposal, Metro Weekly has learned.

In mid-January, the House’s longtime lead sponsor of the Employment Non-Discrimination Act, Rep. Barney Frank (D-Mass.) received a lengthy memo from leading LGBT advocates and researchers laying out the case for why President Obama should take action now by executive order to protect LGBT employees who work for federal contractors from sexual orientation or gender identity discrimination. 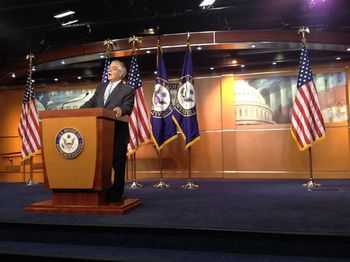 On Jan. 13, those advocates met with Diego Sanchez, Frank’s senior policy advisor, to discuss the proposal in depth, presenting him with the memo, which, in addition to describing the nondiscrimination proposal, details that the executive order could require contractors to provide domestic partner benefits for their employees.

Two of the organizations represented at the meeting — the Center for American Progress and the Williams Institute — wrote the lengthy memo, marked “confidential” and obtained by Metro Weekly, to Frank. The memo recommends to Frank that Obama should take such action, in part, because it would “be a strong precedent for congressional passage of ENDA.”

The 12-page memorandum — which Sanchez confirmed to Metro Weekly was read by Frank — lays out the case for the executive order proposal, from ongoing discrimination faced by LGBT people to the fact that ENDA will not pass in the current Congress. It goes on to detail the specific methods that could be employed to issue the protections — from expansion of an existing executive order addressing federal contractor discrimination to a new executive order that specifically would address only sexual orientation and gender identity discrimination.

Sanchez, who led the Jan. 13 meeting, tells Metro Weekly, that the meeting was held at the request of Freedom to Work founder Tico Almeida, who served as the lead counsel for ENDA in the House from 2007 through 2010.

Of the memo, Sanchez notes, “Part of what was in the memo was about the timing: allowing six months for the Department of Labor to write the recommended regulations and allow for the public comment period, so everyone in the country would be able to weigh in.

“There has to be time enough to do the regulations,” Sanchez says, making the case for quick executive action in light of this November’s presidential election. “You can’t just have the executive order; you have to have the regulations.” 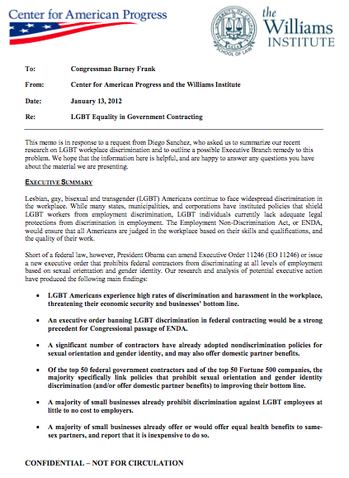 The co-authorship, the Williams Institute’s Brad Sears says, is because Williams has focused on the research being conducted in regards to the proposal while CAP has been focused on the policy aspects. Of their work, Sears tells Metro Weekly, “Our aim really has been to do a series of research projects measuring the kind of impact an executive order would have for federal contractors.”

Specifically, he notes that the research addresses how many people is the executive order would cover, what the experience of other jurisdictions is with similar policies and what the economic impact of these policies would be.

Krehely tells Metro Weekly, “We are often asked to brief Hill offices on our research and this is one of those examples. Given how much Barney has done on ENDA … and given the realities of the House, I’d imagine he’s looking at ways to get the ball a little — not all the way — down the field. I don’t think it would be surprising to people to think that Barney would be interested this proposal.”

Almeida says that he has “briefed numerous Capitol Hill offices both on the House side and the Senate side … about the proposed executive order for federal contractors.

“I’m now sufficiently confident” that it will be signed, Almeida tells Metro Weekly. “When he does, we want our Capitol Hill allies to be fully briefed … to be strong advocates for the wonderful thing the president will have done at that point.”

The memo provides evidence of workplace discrimination faced by LGBT people and details the limited states that have nondiscrimination measures, then concluding that “ENDA … is needed to bring uniform protections to all American workers.” Because of the current congressional make-up, however, the memo pushes for executive action “[i]n the interim,” adding that “[t]he pattern of executive orders prohibiting forms of discrimination prior to Congressional enactment of a broader statute provides strong precedent for the president requiring sexual orientation and gender identity nondiscrimination compliance prior to the passage of ENDA.”

Of this, Sears says, “Based on the research … these policies are already commonplace industry practices among contractors.” But, he noted, “There are millions of employees who are not covered. This would extend those protections to these employees.”

Looking outside the federal government, Sears points to another issue addressed in the memo, saying, “There are already a number of local jurisdictions that have these policies.” He noted that the Williams Institute research shows that such jurisdictions report few problems with such policies, and the memo specifically concludes that “such policies can be implemented with minimal administrative cost and burden.”

The memo then details, in more expansive terms than have previously been laid out in any public comments, the “range of policies” that could be included in the order to “support the LGBT workforce.” The memo states, “An executive order may require federal contractors to (1) adopt nondiscrimination policies for sexual orientation and gender identity; (2) actively recruit and retain LGBT employees and educate all employees to prevent workplace harassment and discrimination; and (3) extend benefits to domestic partners.”

To do so, the memo details, “the president may amend [Executive Order] 11246 to include sexual orientation and gender identity alongside existing nondiscrimination requirements for federal contractors, or he may issue a new executive order.”

Under the executive order as it exists today, the Department of Labor’s Office of Federal Contract Compliance Programs ensures that all federal contractors doing more than $10,000 in government contract work in a year comply with the executive order’s equal employment opportunity policy. The current order prohibits discrimination based on race, color, religion, sex or national origin. The expanded order would add inclusion of sexual orientation and gender identity.

Amending the existing executive order “would strongly signal that discrimination based on sexual orientation and gender identity warrants a remedy similar to that which is used to reduce discrimination based race, color, religion, sex, or national origin” but “could result in a legal challenge that attacks the entirety of EO 11246” and would raise questions, which the memo states are easily addressed, about whether the expansion would “trigger affirmative action and data collection requirements.” Issuing a new executive order, the memo states, would avoid those issues but “may attract more political attention than would amending the existing order.”