In the words of Mahatma Gandhi, ”There is a higher court than courts of justice and that is the court of conscience. It supersedes all other courts.”

Based on the assassination of Grand Duke Sergei Alexandrovich by Russian socialist-revolutionaries, Albert Camus’s Les Justes enters this court with questing urgency. Relevant (despite being written in 1949) and intellectually dense, Camus imagines these radicalized citizens both before and after the violence and explores their motives, rationales and, ultimately, the constraints of conscience in the actions they choose to take or decline. Though the intellectually curious will not be shocked by Camus’s frank consideration of what motivates extremism – whether ever justified or not – credit is very much due WSC Avant Bard for staging a piece that elevates the discussion well beyond the current sound bites. 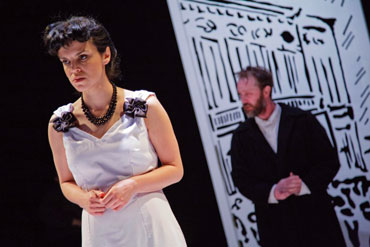 Set in the round, with an evocatively sparse set and harsh lighting, director Jay Hardee very much suggests that this is a place in which arguments will be made and, ultimately, judgments delivered. And, as if pleading their respective cases, the characters expound on what drives and troubles them not only to each other, but also occasionally to the audience. The breaking of this invisible barrier is an unsettling reminder that extremism is closer than one might wish it to be, as is Hardees’s choice to have the audience enter in what turns out to be the conspirator’s door.

Opting not to cloud his ideas with the historical or personal details of his characters, Camus gives only as much detail as illustrates the urgency of the arguments, justifications, emotions and terrors that surround the window of opportunity of the planned act of violence. What emerges from this rarified arena as each conspirator stakes or pulls their claim to the cause, is the status of their conscience: Can they accept what they have given up for this cause? Can they accept what they will do for this cause? Though the dilemmas may be clear, the answers are not.

An ensemble production, and nicely adapted (and translated) by Rahaleh Nassri, much here is driven by the young and idealistic Yanek who embraces the cause, at least at first, with an ardor most young men save for their first love. When Dora, the only woman in the group, begins to offer him such earthly connection, it raises a question many ask in the aftermath of an act of terror: Did they love and, if so, how could they turn their back on such human joy? (This is a question also raised in Sebastian Faulks’s poignantly observed novel A Week in December and is well worth a compare and contrast for students of the issue.)

As the driven Yanek, James T. Majewski exudes a fervent energy that, though it could have offered a tad more dimensionality, certainly suggests the recently adolescent stridency of the young. Yanek is not just an idealist, he is also a quite seriously insecure young man looking to prove himself and Majewski begins to capture the vulnerability fueling th

Dora is perhaps Camus’s most challenging character here moving as she does from defiant to wistful to strident and back again in a struggle to conquer her emotions and doubts. It’s a hard internal logic to project, and though Nora Achrati gives her young woman much memorable presence and some strongly poignant moments, she cannot quite take her Dora through all of Camus’s paces.

As the seasoned and most embittered of the group, the older Stepan has little time for Yanek’s brand of idealism and their arguments repeatedly raise Camus’s question as to whether morality can ever coexist with extremism. There is so much here – and indeed everywhere in this play — to contemplate, it begs a second viewing or, at least a second reading.

An impressive figure with an appropriately neglected beard, John Stange brings a zealot’s fervor to his Stepan. Feverish and unpredictable, he convincingly embodies the archetype and yet, in one vulnerable moment when he surrenders to Dora’s healing embrace, he also gives us a believable man.

As group leader Annenkov, Frank Britton is a powerful cornerstone to the production and gives his man a nuanced gravitas. As always, the stage is a better place when he’s on it.

And thus, Camus and Avant Bard ask: What would you do? Enter the black box and see if you get your answer.