In a growing sign that the Democratic Party could face a significant question this summer over whether it will include marriage equality as a plank in the party’s national platform, the co-chairs of the Congressional Progressive Caucus announced their support for such a plank today. 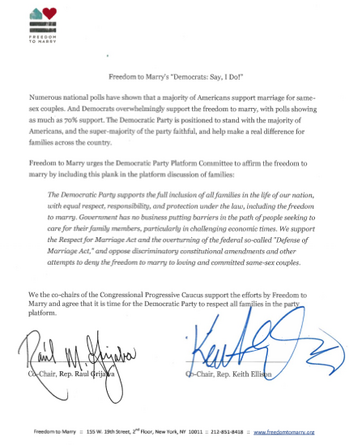 The co-chairs, Reps. Raul Grijalva (D-Ariz.) and Keith Ellison (D-Minn.), released a joint statement announcing that they had signed on to Freedom to Marry’s proposed platform language supporting marriage equality one day after Metro Weekly reported that a spokesman for House Minority Leader Nancy Pelosi (D-Calif.) announced her support for the provision.

Pelosi’s spokesman, Drew Hammill, had replied to a request from Metro Weekly about whether the Democratic leader supported the language by stating that she did.

In today’s statement, provided to Metro Weekly, Grijalva and Ellison write, “We the co-chairs of the Congressional Progressive Caucus support the efforts by Freedom to Marry and agree that it is time for the Democratic Party to respect all families in the party platform.”

Freedom to Marry’s proposed plank states: “We support the full inclusion of all families in the life of our nation, with equal respect, responsibilities, and protections under the law, including the freedom to marry. Government has no business putting barriers in the path of people seeking to care for their family members, particularly in challenging economic times. We support the Respect for Marriage Act and the overturning of the federal so-called Defense of Marriage Act, and oppose discriminatory constitutional amendments and other attempts to deny the freedom to marry to loving and committed same-sex couples.”

In today’s statement, Grijalva and Ellison — who worked in conjunction with Freedom to Marry and Progressive Congress on the announcement — write, “Democrats overwhelmingly support the freedom to marry, with polls showing as much as 70 percent support. The Democratic Party is positioned to stand with the majority of Americans, and the super-majority of the party faithful, and help make a real difference for families across the country.”

The platform — a detailed statement of the party’s positions that will be finalized at the Democratic National Convention to take place in Charlotte, North Carolina, this September — has never included language in support of the right of same-sex couples to marry. And the leader of the party, President Obama, opposed marriage equality in the 2008 campaign. He said in December 2010 that his position on marriage equality was “evolving” but that he still “struggle[s]” with it. His press secretary, Jay Carney, said this past week of Obama’s position, “You know his position, where it stands now, on the issue of same-sex marriage, so I really don’t have much to add on that.”

Obama currently supports much of the Freedom to Marry plank language — outside of the marriage equality language itself. He has endorsed the Respect for Marriage Act, which would repeal DOMA, and opposes “divisive and discriminatory efforts to deny rights and benefits to same-sex couples” such as California’s Proposition 8. After repeated requests by Metro Weekly, including today, the Obama campaign still has not commented on the proposed platform language.