One Million Moms, a project of the the American Family Association, called upon JC Penny to fire talk show host and comedian Ellen DeGeneres after she was hired as the company’s new spokesperson on Jan. 25 — a move that led to the Gay & Lesbian Alliance to launch an online campign “standing up” for the out lesbian entertainer and raising awareness about employment discrimination faced by LGBT people.

In a statement released on Feb. 1, the One Million Moms organization wrote:

Funny that JC Penney thinks hiring an open homosexual spokesperson will help their business when most of their customers are traditional families. More sales will be lost than gained unless they replace their spokesperson quickly. 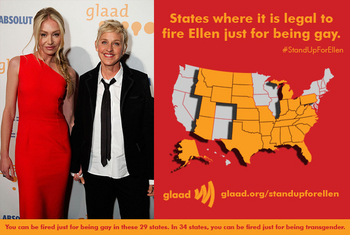 Michael Francis, president of the department store, however, said of its new spokesperson, “We share the same fundamental values as Ellen …. [W]e couldn’t think of a better partner to help us put the fun back into the retail experience.”

GLAAD, though, called upon LGBT equality supporters to “Stand Up for Ellen” by contacting JC Penny and thanking them for making the right choice in hiring DeGeneres.

“While designated hate groups try to start ‘culture wars,’ it’s clear that a vast majority of Americans today support Ellen as well as their LGBT friends and family members,” Herndon Graddick, senior director of programs and communications at GLAAD, said. “Selecting an out performer who has inspired and entertained millions, is not only a smart business practice, but a reflection of how LGBT Americans today are an integral and valued part of the fabric of our culture.”

More than 20,000 people have signed GLAAD’s online petition thanking JC Penny, and many others have taken to Facebook and Twitter to express their support of the decision.

The department store has come full circle since it ceded to similar pressures from the American Family Association back in 1997 when it chose to drop its ad from Ellen’s TV sitcom during the notorious “Puppy Episode” in which DeGenere’s revealed her sexual orientation on primetime television.

MEANWHILE: Freedom to Work celebrated the expansion of employment protections at an employer: DynCorp International.

“Earlier today, the staff at the LGBT organization Freedom to Work obtained a copy of DynCorp’s newly revised policies that now protect against workplace bias because of sexual orientation or gender identity,” the organization noted in a news release today.

The new policies at DynCorp have been sought by activists in recent weeks and are available now in the company’s “Code of Ethics and Business Conduct.” (A pdf is available at the company’s site.) Tico Almeida, the founder of Freedom to Work, noted that a petition he had started on Change.org asking the company to change its policies had received more than 55,000 signatures. He started the petition two weeks ago after, the release states, DynCorp settled a lawsuit with a former employee who claimed that despite significant anti-gay harassment on the job, DynCorp officials did not step in to stop the abuse. DynCorp settled out of court with the employee in January for more than $150,000.

Today, Almeida also referenced Metro Weekly‘s earlier report from Jan. 31 about a proposed expansion of a current executive order that bans discrimination by federal contractors to include a ban on sexual orientation or gender identity discrimination.

Almeida said in today’s statement, “Most of the big federal contractors already have good LGBT non-discrimination policies because they have realized that workplace fairness leads to greater efficiency and larger profits. So President Obama’s executive order won’t require any changes from the best contractors like Boeing and General Dynamics. The order will only affect the retrograde companies like DynCorp, and today’s victory shows that even they are willing to change.”