If elections were solely decided by the LGBT community, some incumbent councilmembers would be serving on borrowed time.

Incumbent Councilmembers Marion Barry (D-Ward 8) and Yvette Alexander (D-Ward 7) lost big at a Feb. 23 meeting of the Gertrude Stein Democratic Club, earning only 7.8 percent and 2.6 percent, respectively, of the votes of active club members present. The Stein Club for LGBT Democrats is among the most influential Democratic clubs in the District. The Feb. 23 endorsement meeting, one in a series ahead of the April 3 primaries, was seen by many in attendance as a rejection of the two incumbent councilmembers for their weak records on LGBT issues. 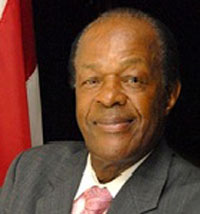 Alexander and Barry were the only two of the 13-member council to vote against marriage equality, and Barry was the sole vote against recognizing out-of-state same-sex civil marriages.

In a related development, Barry and Alexander tied for the single-lowest candidate rating from the nonpartisan Gay and Lesbian Activists Alliance (GLAA). Based on their responses to a GLAA questionnaire, their legislative records and their ”championship,” or lack thereof, on issues important to the LGBT community, both Barry and Alexander earned a rating of -3.5 from a ratings range of -10 to 10.

Specifically, GLAA graded Alexander’s submitted questionnaire as ”weak” and ”marked by disagreement with GLAA on basic issues.” But she performed worst when it came to analyzing her record on the council, which included introducing legislation to make prostitution-free zones (PFZs) permanent, which opponents – such as the GLAA – say is both unconstitutional and increases profiling and discrimination against transgender people.

Alexander also introduced a bill creating mandatory HIV testing for people applying for marriage licenses, compared the city’s HPV vaccination program to a ”Tuskegee experiment” on young black girls, and introduced an amendment to the marriage-equality bill that would have gutted the D.C. Human Rights Act of protections based on sexual orientation.

Barry, meanwhile, did not submit a questionnaire, and was judged on his record and advocacy of anti-gay causes, including campaigning against marriage equality, leading protesters in anti-gay chants, and co-sponsoring legislation mandating HIV testing for people seeking marriage licenses and supporting permanent PFZs.

Rosendall lamented the overall lack of strong LGBT advocates for all races this cycle, but he also noted that some of the lower ”positive” ratings for non-incumbents were based on the candidates’ lack of a record on LGBT issues, and are not necessarily intended as marks against candidates.

”Our intent is not to play ‘gotcha’ with these ratings, but to educate candidates and inform the community,” Rosendall said.

Returning to the Feb. 23 Stein meeting for the Ward 7 and 8 Democratic endorsements at the HRC Equality Center, the mood was contentious. Many club members spoke out against Barry and Alexander for their records and their efforts against major LGBT initiatives.

With Alexander absent from the meeting and no one stepping forward to nominate her for consideration, that left Ward 7 challengers Dorothy Douglas, Monica Johnson, Bill Bennett, Brown and Chavous to compete for the group’s endorsement.

Bennett, a Baptist minister, raised a few eyebrows when he told the group that his religious beliefs did not approve of homosexuality. When asked later if he would have voted for D.C.’s 2009 marriage-equality bill, he said he would have opposed it.

In contrast, Brown, a former teacher who is also an ordained minister, said his religious beliefs oppose homosexuality, but stressed that he would not impose his faith on others as a councilmember. Brown said he would have voted in favor of marriage equality. He also criticized Alexander for not actively engaging the community on the marriage bill, saying opinion in the ward was not overwhelmingly opposed as Alexander had claimed when the bill was debated.

Chavous also gave a strong performance, coming out in opposition to PFZs, which he called ”unconstitutional,” saying he would have voted for marriage equality, calling for implementation of required sensitivity training for police officers, and backing grant-making authority for the Mayor’s Office of GLBT Affairs.

After the candidates left the room, activist Lane Hudson stood to express his opposition to Alexander, saying she needed to apologize for her vote against marriage equality. He also called out Barry, saying, ”You need to apologize as well.”

In the Ward 7 race, on the first ballot, Brown received 55.2 percent of the vote, with Chavous and Douglas tying for second at 15.7 percent. ”No endorsement” earned 10.5 percent and Alexander still managed 2.6 percent despite no representation. In the run-off between the top three candidates, Brown earned 62 percent of the vote, meeting the 60 percent threshold required to earn Stein’s official endorsement for the race.

Meanwhile, Barry, appearing in person, proved the biggest personality in the Ward 8 campaign. In addressing the audience, he reminded those in attendance of his longstanding support of the LGBT community and personal ties to the Stein Club, which gave him his first Democratic endorsement when he faced former Mayor Walter E. Washington and then-Council Chair Sterling Tucker in the 1978 mayoral race.

”I have supported the LGBT community more than anyone on the council, including David Catania,” Barry said, taking a swipe at out gay Councilmember Catania (I-At Large), with whom he recently had a profanity-laced squabble during a council retreat. Catania and Barry have frequently butted heads over a variety of issues, particularly so since Barry voted against marriage equality.

Barry was the only Ward 8 candidate who did not return the club’s candidate questionnaire, but said he wanted to show up in person and address the group. ”Anybody can put words on a paper,” he said.

”Judge me by the whole book, not one page in the book,” Barry pleaded with Stein members, arguing that in the course of his political career he had kept a gay teacher from being fired, instituted the first sensitivity training course and LGBT liaison for the Metropolitan Police Department, and appointed the first openly gay person in city government.

But Gaston countered that Barry and the other candidates – Sandra Seegars and Jacque Patterson – ”can talk a good game, but I’m giving you results.” Gaston cited his work with transgender youth at Wanda Alston House, his testimony in favor of marriage equality and corralling ANC 8B commissioners to support the measure.

Patterson also hit Barry for his opposition to marriage equality.

”When the chips were there, he did not vote in your favor,” Patterson said to the assembled activists.

Community activist Philip Pannell was more blunt when given the opportunity to speak, raging against Barry for making LGBT people the object of ridicule and fostering a ”poisonous” atmosphere against LGBT individuals in the ward by ”making us a moving target for scorn in the community.”

In the Ward 8 race, on the first ballot, Patterson got the lion’s share of votes, winning 47.3 percent over Seegars and Gaston, who each netted 18.4 percent. Barry got 7.8 percent. The remainder went to ”no candidate” and a write-in.

In the second round of balloting, no candidate earned 60 percent of votes, leaving no Stein endorsement in the Ward 8 race.

Still, LGBT activist Bob Summersgill said he was ”thrilled” with the results and felt he had accomplished what he set out to ensure: neither Barry nor Alexander earning endorsement.

”Neither one was rewarded for their treachery against our community,” said Summersgill. ”I think it is important that a sitting incumbent could not get a Democratic club’s endorsement, and that speaks volumes.”

”Yvette Alexander has done more to hurt our community than Barry, but Barry actually campaigned against us,” Summersgill added. ”I’m just very happy that our community did not reward the incumbents who worked so hard against us.”