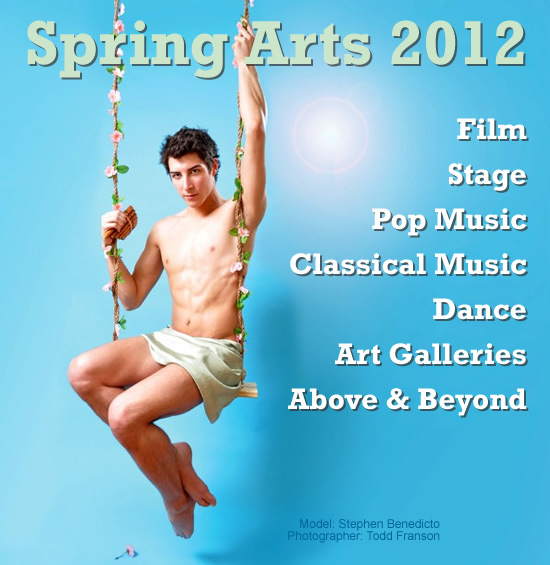 In order of scheduled release date. Dates subject to change at the whim of a studio executive.

THE HUNGER GAMES – Set in a dystopian future where teenagers fight to the death on live television, this sure-to-be hit stars Jennifer Lawrence as Katniss Everdeen – not that we need to explain, since this adaptation has been advertised everywhere. Read the books if you must, but don’t miss the movie. (3/23)

THE RAID: REDEMPTION – An Indonesian martial arts film about a criminal safe house in Jakarta, The Raid wowed audiences at the Toronto International Film Festival last September. Speaking for all action fans, let’s just say it’s about damn time it got to the states. (3/23)

MIRROR MIRROR – Julia Roberts as a wicked queen? In a long-winded retelling of Snow White? Thanks, but we’d rather munch on an apple laced with arsenic. (3/30)

BULLY – A powerful, breathtaking documentary about teenaged victims of bullying. This is must-see, in every sense of the word, which is why the MPAA better knock its rating down to PG-13 from its idiotic R. (3/30)

GOON – Sadly, this isn’t an adaptation of Eric Powell’s excellent comic series – even if Seann William Scott looks like a chug-head. Instead, Scott plays an aspiring hockey thug, working his way through the minor leagues with an iron jaw and killer right cross. We’ll stick to the funny pages. (3/30)

INTRUDERS – Clive Owen stars in a Spanish horror story about a faceless demon that possesses children. (3/30)

AMERICAN REUNION – Things to expect from American Reunion: more band camp jokes, gratuitous nudity, more apple pie jokes, the death rattle of Eugene Levy’s career, and a reminder that American Pie came out 13 years ago. But hey, at least the gang’s back together! (4/6)

TITANTIC (IN 3-D) – This is one of those movies you’re either thrilled to see, or don’t give a lick about. We’re still trying to figure out how James Cameron will manage to project Billy Zane’s smarm in three dimensions. (4/6)

DAMSELS IN DISTRESS – After 12 years, Whit Stillman (Metropolitan, Barcelona) is back – and from the looks of Damsels in Distress, he’s not changed much, still dissecting the lives of preppy kids with self-deprecating wit, still taken by the group dynamics of the privileged, and still an acquired taste for mostly everyone. (4/6)

THE HUNTER – Your ill-timed art house movie of the season is The Hunter, the adaptation of a Julia Leigh novel. Willem Dafoe plays the titular hunter, hired by a biotech conglomerate to track down the last remaining Tasmanian tiger – and for what it’s worth, his performance looks rave-worthy. (4/6)

THE CABIN IN THE WOODS – Joss Whedon calls this mystery of a movie his ”loving hate letter” to horror. Almost nothing is known about the plot and characters – and based on Whedon’s penchant for genre-bending surprises, we suspect that’s a good thing – but all signs point to this movie’s greatness. (4/13)

THE THREE STOOGES – Finally, our long national nightmare is over — America is getting a Three Stooges origin story! (4/13)

CHIMPANZEE – Say what you want about the dangers of depicting wild animals in deceptive human ways, but the string of nature documentaries Disney has churned out since Earth are top notch. Shot over three years in the jungles of the Ivory Coast and Uganda, Chimpanzee looks to continue that tradition. (4/20)

THE LUCKY ONE – So, Zac Efron’s still trying to be an actor. If only persistence and Nicholas Sparks adaptations curried the academy’s favor, he’d be the Spencer Tracy of our time. (4/20)

DARLING COMPANION – Diane Keaton stars as a woman who loves her dog more than her husband – but then her husband loses her dog! This is gold, people! (4/20)

THE FIVE-YEAR ENGAGEMENT – And finally, the worthwhile comedy of the season rears its Apatow-produced head. Muppets buddies Jason Segel and Nicholas Stoller reunite with this R-rated comedy about a couple that keeps putting off their big day. Come for Segel’s comic bumbles, but stay for the killer cast he’s put together to back him up, including Emily Blunt, Alison Brie and Chris Pratt. (4/27)

THE RAVEN – John Cusack plays Edgar Allen Poe as he tries to hunt down a murderer who mimics his stories. Decency, thy name is Hollywood. (4/27)

THE PIRATES! BAND OF MISFITS – A fun-looking kids’ flick from the minds behind Wallace and Gromit about a swashbuckler who’s competing for the ”Pirate of the Year” award. If you’ve got little grommets of your own, just don’t forget: It could be much worse than this. (4/27)

SAFE – Jason Statham stars as a former elite special agent who has to rescue an abducted girl, fight off warring mafia factions, and avoid capture at the hands of corrupt cops. If that sounds familiar, it’s because you’ve seen Safe before. It’s also known as Every Jason Statham Movie Ever Made. (4/27)

BERNIE – Keep your eyes on this one, it’s got the potential to be a surprise hit. The ingredients: Richard Linklater and Jack Black, the true-life story of a gay man who killed his 81-year-old millionaire lady companion, and a mockumentary style that’s attracted praise for its self-awareness. (4/27)

ELLES – For the foreign-language crowd, mark your calendars for Juliette Binoche’s latest, a French and Polish drama about a journalist who investigates a prostitution ring among female college students. The surprise to it all? Sexual identity and empowerment are presented hand-in-hand with the world’s oldest profession. (4/27)