Two Coasts, Two Visions of Equality — for AFER and SLDN 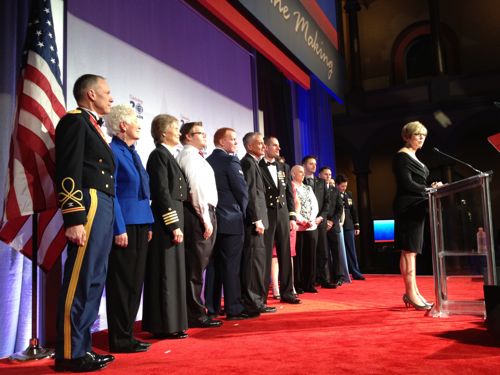 On Saturday evening, March 3, two events were held putting forth two visions of equality, one in the Armed Forces and one about marriage.

In DC, supporters of the Servicemembers Legal Defense Network gathered at the National Building Museum for the organization’s 20th annual national dinner, emceed by MSNBC’s Thomas Roberts and featuring a keynote address by President Obama’s senior advisor, Valerie Jarrett. Jarrett, who previously addressed the Human Rights Campaign’s annual dinner, spoke to SLDN about the repeal of “Don’t Ask, Don’t Tell,” including an extended story about now-SLDN Development Director David Hall’s experience in the military and discharge under DADT. In part, Jarrett said:

[I]n the Obama Administration, we talk a lot about change. Well thanks to the work we’ve done together, if anyone ever asks you what change is all about, you can tell them that change is finally being able to put a family photo on your desk. Change is being able to tell your coworkers what you and your loved one did over the weekend, or what you have planned for your family vacation. Change is being able to share stories about your family with fellow servicemembers while you’re away from home, and living with the fear that you may never see them again. Change is knowing that if you make that ultimate sacrifice for your country, someone will be able to notify your loved ones. That’s change.

The dinner was SLDN executive director Aubrey Sarvis’s last, as he announced earlier this year that he would be leaving the organization when a successor is named to take his place, and he was honored from the stage for his service to the organization.

On the other coast, supporters of the American Foundation for Equal Rights — including the group’s board president, Chad Griffin, who was named the next president of HRC on Friday, March 2 — gathered at the Wilshire Ebell Theatre in Los Angeles for the West Coast premiere of 8, Dustin Lance Black’s play about the Perry v. Schwarzenegger trial challenging the constitutionality of California’s Proposition 8.

WATCH the Los Angeles 8 premiere, screencap below, below the jump. 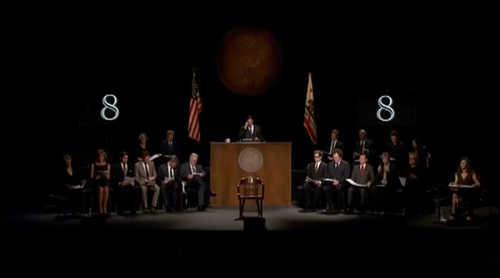