Home / Life + Leisure / Travel / A lesson from Durham, NC: Don’t judge a city by its state

A lesson from Durham, NC: Don’t judge a city by its state

By Troy Petenbrink on May 14, 2012 @thegaytraveler 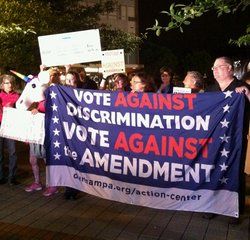 As Kym Register talks about North Carolina’s effort to stop same-sex marriage the feelings of shame and pride can be heard in her voice.

Voters in North Carolina approved one of the nation’s most restrictive constitutional amendments on Tuesday, May 8, defining marriage solely as a union between a man and a woman and banning same-sex marriage as well as civil unions for both gay and straight couples.

With the passage, North Carolina becomes the 30th state and the final former Confederate state to formally add a same-sex marriage ban to its Constitution.

A North Carolina native, Register is ashamed that the majority of voters would define her 4-year relationship with her girlfriend as unworthy of recognition, yet she is also proud of the grassroots support – by gays and straights – that she witnessed in her much loved city of Durham and in the state’s other progressive cities such as Raleigh, Charlotte, Chapel Hill, and Asheville.

Nearly 35% of North Carolina’s registered voters participated in last Tuesday’s vote. The constitutional amendment, commonly referred to as Amendment One, passed with 61% of the vote. However, in Durham County, nearly 70% of voters opposed the amendment.

In a statement released by Washington, D.C.-based National Gay and Lesbian Task Force, the organization’s executive director Ray Carey said, “We thank all the voters who rejected Amendment One. We stand in solidarity with them and the Coalition to Protect North Carolina Families as they build on this effort to make North Carolina welcoming and safe for all.”

Activist and actress Roseanne Barr, who is running for President as a member of the Green Party and has a lesbian sister and a gay brother, wrote on Twitter, “hollywood withdraw your productions from NC!” However, she later added, “re thinking my call for boycotting NC-let’s just boycott the counties that voted for bigotry-.”

Register, who owns what she calls a queer positive live music venue in downtown Durham, hopes that LGBT travelers will continue to come to North Carolina – especially to its many welcoming cities.

“We need people to come and be visible,” says Register. “This is not the time to turn your back.”

Durham is not alone when it comes to being located in states that has less than gay-friendly laws. Richmond, Va.; Columbus, Ohio; and Dallas, Texas are just few examples of destinations that proactively encourage LGBT tourism yet are in what many would consider unwelcoming states.

David Paisley, the senior projects director with Community Marketing, Inc., a gay and lesbian market research firm, points out that, if LGBT travelers were to boycott cities in state that have anti-gay laws, many of today’s most popular gay travel destinations would have to be avoided.

In the 16th Annual Gay & Lesbian Tourism Report, Community Marketing found that LGBT travelers think more positively about and are more likely to travel to states that approve same-sex marriage. It also found that while LGBT travelers say that they deliberately avoid destinations that have anti-gay laws, they will visit gay-friendly cities and towns, even if located in gay unfriendly states.

Paisley believes that gay travelers should “seek out and support gay-friendly destinations.”

Many online resources such as LGBT.travel, TAGApproved.com, and PurpleRoofs.com are available to help travelers identify gay-friendly destinations.

A version of this article was first published by EDGE, a Metro Weekly media partner.