BREAKING: OBAMA EVOLVES: “I think same-sex couples should be able to get married.” 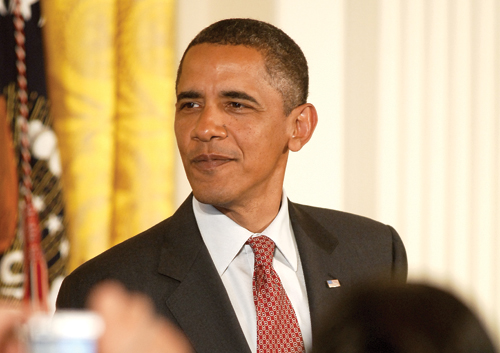 President Barack Obama today announced his support for the right of same-sex couples to marry, ending an evolution in which he told reporters and bloggers he had been engaged since 2010, in an interview today with ABC’s Robin Roberts.

Saying that he thought civil unions would be “sufficient,” he then told Roberts, “I’ve just concluded that for me personally it is important for me to go ahead and affirm that I think same-sex couples should be able to get married.”

The interview, which The New York Times reports was hastily scheduled on Tuesday of this week, brought the Good Morning America anchor to the White House to discuss a broad range of topics. The key issue on many minds, however, was marriage equality.

Until this past weekend, the administration’s line had been that there was no news on the president’s position, which had been “evolving” on the topic since late 2010.

Then, Vice President Joseph Biden appeared on Meet the Press.

Biden there told host David Gregory that it was his belief that marriages of lesbians or gay men or heterosexuals all came down to the same roots of love and loyalty. He went on to say he was “absolutely comfortable” with that, and — due to some backtracking from the administration and Obama campaign — the questions of Biden and Obama’s views on marriage equality started and did not end until today’s announcement.

Notably, the move comes one day after North Carolina voters amended their constitution to prohibit not just same-sex couples from marrying but also all unmarried couples from having any recognition of their relationships.

Obama’s evolution, to use his phrase, is somewhat unusual in that he supported marriage equality while running for state senate in Illinois in 1996.

“I favor legalizing same-sex marriages, and would fight efforts to prohibit such marriages,” Obama told Chicagoans in a letter to the Outlines newspaper dated Feb. 15, 1996.

Since he began running for federal office, however, Obama had supported civil unions but not marriage equality.

Running for the U.S. Senate in 2004, Obama supported the repeal of the Defense of Marriage Act and civil unions but opposed same-sex marriage for “strategic” reasons.

“I am a fierce supporter of domestic-partnership and civil-union laws. I am not a supporter of gay marriage as it has been thrown about, primarily just as a strategic issue,” then-Senate candidate Obama bluntly told Chicago’s Windy City Times in 2004. “I think that marriage, in the minds of a lot of voters, has a religious connotation.”

Throughout his presidential campaign in 2007 and 2008, Obama heavily sought LGBT support despite still opposing marriage equality and, after being elected president on the same night that Proposition 8 ended marriage equality in the state of California, Obama continued pushing his LGBT bona fides.

At a news conference in December 2008, Obama declared that “it is no secret that I am a fierce advocate for equality for gay and lesbian Americans.”

Not even six months into his presidency, however, his Justice Department, led by Attorney General Eric Holder, filed a brief in Smelt v. United States, a challenge to DOMA, declaring at one point that “DOMA does not discriminate against homosexuals in the provision of federal benefits.”

The outcry from the LGBT community was immediate — and harsh. An unusually vocal Human Rights Campaign president Joe Solmonese criticized the filing, and others were far less charitable than he.

As “Don’t Ask, Don’t Tell” repeal heated up, however, the attention turned to pressuring Obama to act on that front. In late 2010, however, attention returned to marriage — first with AmericaBlog‘s Joe Sudbay, then with The Advocate‘s Kerry Eleveld, and then with the whole press corps — Obama stated then that his position on the issue was “evolving.”

The day that he signed the Don’t Ask, Don’t Tell Repeal Act into law he was asked by ABC News’s Jake Tapper about marriage equality. Obama replied, “As I’ve said, my feelings about this are constantly evolving.”

Then, on Feb. 23, 2011, Obama — in a letter from Attorney General Eric Holder to House Speaker John Boehner (R-Ohio) — declared that he believed Section 3 of DOMA was unconstitutional and Holder stated that the administration would no longer defend that definition in court.

“After careful consideration, including a review of my recommendation,” Holder wrote, “the President has concluded that given a number of factors, including a documented history of discrimination, classifications based on sexual orientation should be subject to a more heightened standard of scrutiny. The President has also concluded that Section 3 of DOMA, as applied to legally married same-sex couples, fails to meet that standard and is therefore unconstitutional. Given that conclusion, the President has instructed the Department not to defend the statute in such cases. I fully concur with the President’s determination.”

Since that time, the administration has filed briefs in several cases challenging Section 3 of DOMA — the federal definition of marriage — and has sent senior Department of Justice lawyers to hearings to oppose the law in court.

WATCH THE VIDEO at ABC News.