Following the May 19 endorsement of a resolution by its board of directors supporting marriage equality, the National Association for the Advancement of Colored People (NAACP)’s president, Benjamin Todd Jealous, called the decision “one of the key civil rights issues of our time.”

Jealous told reporters today in Baltimore that he hoped that the NAACP’s resolution, coupled with the organization’s standing in the black community, would advance the issue of marriage equality.

“I hope this will be a game-changer,” Jealous said. “There is a game being played right now to try and enshrine discrimination in state constitutions across this county, and if we can change that game and help ensure that our country’s more recent tradition of using federal and state constitutions to expand rights continues, we will be very proud of our work.” 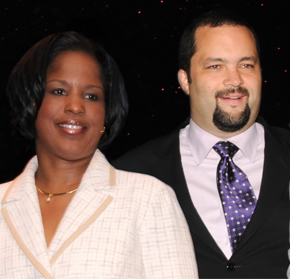 Speaking at a news conference today at NAACP headquarters in Baltimore, Jealous told an assembled group of reporters that despite a long history of opposing constitutional amendments that he said “restrict rights” in states like North Carolina and California, the board’s approval of the resolution marks the first time that the organization has made a full statement supporting marriage equality itself.

Coming on the heels of a referendum where 61 percent of North Carolina voters cast their ballots to ban same-sex unions, despite there being a law banning same-sex marriage already in place, and President Obama’s announcement that he believes same-sex couples should be allowed to marry, the NAACP board members voted to approve a resolution clarifying their opposition to policies and initiatives “that seek to codify discrimination or hatred into the law.” The resolution went a step further, also stating the group’s support of marriage equality as “consistent with equal protection under the law,” as provided under the Fourteenth Amendment of the U.S. Constitution.

Jealous said the NAACP also opposes the Defense of Marriage Act (DOMA) — as it had since it was being considered by Congress in 1996 — and budgetary tactics in Congress to this day that seek to restrict marriage equality. Citing the organization’s history of standing up for people’s constitutional rights, he said the NAACP will also oppose efforts by Congress or any future president pushing for a constitutional amendment to ban same-sex marriage.

“We want it to be on record that the NAACP firmly opposes all efforts to restrict marriage equality,” Jealous said. “Civil marriage, like all civil rights provided by the government, must be provided equally to all.”

All representatives for the organization pointed out that they were not seeking to inflame the ire of or dictate practices to religious groups or individuals who have religious opposition to marriage equality.

“The NAACP did not issue its support of marriage equality from a personal, moral or religious perspective,” said Roslyn Brock, chair of the board of directors for the NAACP. “Rather, we deeply respect differences of personal conscience and a religious definition of marriage, and we strongly affirm the religious freedom of all, as protected by the First Amendment.

“When people ask why the NAACP stands firm for marriage equality, we say that we have always stood against laws that demean, dehumanize or discriminate against any person in this great country. That is our legacy,” Brock added.

As to the specifics of the vote on the resolution, Brock characterized it as an “overwhelming” vote, but did not provide vote tallies. However, in response to a reporter’s question on rumors that there were “several nays” from members of the board of directors, Jealous said it was not true. Maxim Thorne, a former NAACP senior vice president, wrote on May 19 that the resolution was passed with only two members of the 64-member board opposed.

At one point, Jealous choked up, referencing how his own parents, married in 1966 as an interracial couple, were at one time banned from marrying in their hometown of Baltimore due to anti-miscegenation laws.

When asked if Obama’s stated support of marriage equality had compelled the NAACP to adopt the resolution, Jealous said that it did not. Rather, it was simply the first time that the board had met since North Carolina’s ban on same-sex unions passed.

Jealous told reporters that the board realized that there were several other measures similar to North Carolina’s that would be occurring this year, and that the board wanted to prevent marriage equality from being used as a wedge issue, particularly among members of the African-American community.

“The intention was to get out ahead of what seemed to be a tidal wave of attempts to put discrimination in state constitutions across the country,” he said. “We felt it was time for us to speak up.”

Jealous later told Metro Weekly that the board was not pressured to endorse the resolution, either from outside supporters of marriage equality or internally by more liberal members of the board.

“You don’t get an overwhelming vote from the Board of Directors of the NAACP unless the board members overwhelmingly want to vote that way,” he said. “These are skilled advocates. You can’t push them around.”

Gerald Stansbury, president of the Maryland State Conference of the NAACP, said he hoped that Marylanders would understand that the NAACP views the issue as a constitutional issue, not a religious one, echoing earlier statements by Brock and Jealous. Stansbury also said the organization was “not taking sides either way” on marriage, but was instead advocating that every person’s rights should be protected under the law.

Stansbury said that there has not been much discussion about a possible referendum to overturn the state’s recently passed marriage equality law. When asked if the NAACP would get involved, either officially or unofficially, with the fight to uphold the law, Stansbury said he believed people need to be educated about what the law does — in his view, protect rights.

Following the press conference, Kevin Nix, spokesman for the Marylanders for Marriage Equality coalition, of which the Baltimore branch of the NAACP is a member, released a statement affirming the NAACP’s support.

“The tide is turning,” Nix said in the statement. “A majority of Marylanders support committed gay and lesbian couples getting married and protecting their children equally under the law. President Obama’s recent endorsement of same-sex marriage, along with this weekend’s NAACP Board vote, will help continue to change hearts and minds in all communities, including among African-Americans …. People see that this issue is about love, commitment and making families stronger.”