In an ongoing fight with Republicans over the reauthorization of the Violence Against Women Act, the White House laid out a veto threat this afternoon, stating that the House version of the legislation — which lacks LGBT-inclusive measures contained in the Senate version — was unacceptable. 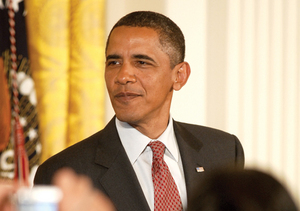 The Administration urges the House to find common ground with the bipartisan Senate-passed bill and consider and pass legislation that will protect all victims.  H.R. 4970 rolls back existing law and removes long-standing protections for victims of domestic violence and sexual assault – crimes that predominately affect women.  If the President is presented with H.R. 4970, his senior advisors would recommend that he veto the bill.

Specifically, the statement notes of the House version, “The bill also fails to include language that would prohibit discrimination against LGBT victims in VAWA grant programs.”

Additionally, the administration issued its views on the House Armed Services Committee-passed version of the National Defense Authorization Act. For several provisions, including those that the administration states “would impinge on the President’s ability to implement the New START Treaty and to set U.S. nuclear weapons policy,” a veto threat was issued.

Regarding two provisions opposed by LGBT advocates, the language was less definitive. According to the Statement of Administration Policy:

Protection of Certain Religious and Moral Beliefs: The Administration strongly objects to sections 536 and 537 because those provisions adopt unnecessary and ill-advised policies that would inhibit the ability of same-sex couples to marry or enter a recognized relationship under State law.  Section 536 would prohibit all personnel-related actions based on certain religious and moral beliefs, which, in its overbroad terms, is potentially harmful to good order and discipline.  Section 537 would obligate DOD to deny Service members, retirees, and their family members access to facilities for religious ceremonies on the basis of sexual orientation, a troublesome and potentially unconstitutional limitation on religious liberty.