Human Rights Campaign president Joe Solmonese was on double duty today, serving as the main speaker on the launch of the Obama for America campaign’s LGBT outreach today. Earlier this year, Solmonese had been announced as one of the co-chairs for the campaign for President Obama’s re-election, which HRC endorsed in 2011.

Answering questions in his campaign role, more than once Solmonese mentioned HRC efforts and, in response to a question about whether the campaign was attempting to win over LGBT Republicans, spoke almost exclusively about HRC’s efforts in that regard. Solmonese’s HRC successor, Chad Griffin, is slated to start at the nation’s largest LGBT political organization, headquartered in DC, on June 12. 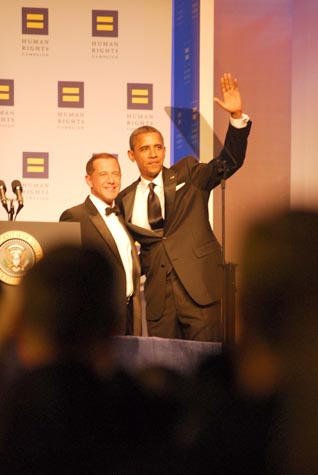 Much of the call’s opening, in which Solmonese was joined by campaign spokesman Clo Ewing and campaign national LGBT vote director Jamie Citron, was focused on a detailing of Obama’s accomplishments in his first term, from this past week’s support for marriage equality to the repeal of “Don’t Ask, Don’t Tell” to Obama’s recording of an “It Gets Better” video.

Metro Weekly led off the question-and-answer portion of the call with a look forward, asking what effort there will be during the campaign to lay out a plan for LGBT equality aims in the second term of an Obama administration.

Solmonese responded generally, talking about collective decision-making regarding priorities, but did specifically mention the repeal of the Defense of Marriage Act and the passage of the Employment Non-Discrimination Act as “landmark issues” that remain to be addressed.

“One of the things I’ve really been inspired by the president and the administration — and this goes back to the days that we met with them in the transition offices before we were in the White House, and quite frankly, it goes back to during the campaign in the general election — one of the things that was always clear to me, and it came from the president, was that the agenda was really a collective conversation between the president and the administration, us as a community and our allies on Capitol Hill in the House and the Senate,” he said. “And that collective agreement and collective sense of where we were had everything to do with why we moved hate crimes first, we moved ‘Don’t Ask, Don’t Tell’ second. So, I think that collective understanding of where we’re going is how we’re really going to shape the agenda for the next administration.

“Obviously, we have landmark issues that we need to continue to address, continue to move on, like the repeal of DOMA, like the passage of a fully inclusive ENDA.

“So, that’s the kind of ongoing conversation that we’ll have. I think one of the things that we all recognize, and I think the president recognizes this, and we saw this during the repeal of ‘Don’t Ask, Don’t Tell,’ is that the makeup of Congress is going to have a lot to do with that. And that is why those fights and the fight that we do everything we can to take back an LGBT-friendly House of Representatives are going to have a lot to do with how that agenda gets shaped. And hold what we have in the Senate, and hopefully add to those numbers.”

On April 11, it was Solmonese who came away from a White House meeting dissatisfied, being one of several LGBT advocates told by White House senior advisor Valerie Jarrett that Obama would not be issuing an executive order at this time to prohibit federal contractors from discriminating on the basis of sexual orientation or gender identity. That day, he said, “We are extremely disappointed with this decision and will continue to advocate for an executive order from the president.”

A week later, Solmonese sent out an email to HRC’s supporters, arguing that they should “[t]ell our leaders in Washington there can be no excuses for inaction on vital workplace protections.” Specifically, he noted, “Armed with the power of the Executive Order, the President can significantly expand the reach of non-discrimination policies by telling all companies that do business with the federal government that they can’t discriminate against LGBT employees.  Such an order would bring these companies’ policies in line with the best practices of major American businesses, including the top five federal contractors – all defense-related companies.”

Today, however, Solmonese did not mention the executive order on the Obama campaign’s call.

Other questions on the call included a focus on the political impact in states from Ohio to Florida of the president’s May 9 announcement that he believes that that same-sex couples should be allowed to marry.

Ewing noted that the main aim of the LGBT outreach efforts is to “mobilize folks for November,” but, as to whether Obama’s stand on marriage would affect the vote in swing states, she said, “One of the things that I would do is point you to a lot of recent polls that really show that the support for gay marriage and marriage equality is growing across the country. That being said, what polls also show is that same-sex marriage is not the most important issue that will effect people’s vote come November. It’s not the first issue, it’s not the second issue, and it’s not the third issue.”

As The Washington Post‘s Ezra Klein noted, the result of recent polling shows that, outside of questions about marriage specifically, Obama’s standing in the polls has improved slightly since the May 9 announcement. Over at The Village Voice, Steven Thrasher spoke with ABC News’s pollster, Gary Langer, about the impact of Obama’s decision on black voters, which ABC’s poll taken after the May 9 announcement found that “59 percent of African-Americans in this survey express support for gay marriage.”

UPDATE @ 6P: Even as the polls were revealing this information, Richard Grenell, the short-lived spokesman for Mitt Romney, penned an op-ed in The Wall Street Journal, explaining, “While there are many reasons not to vote to re-elect President Obama, gay marriage is not one of those issues. National and economic security absolutely are.” He also appeared on Fox News today, speaking about his op-ed and related issues.

Citron, meanwhile, announced that the Obama campaign was launching an LGBT-specific campaign page as well.

← Previous Story White House Sets LGBT Pride Month Reception for June 15, Sends Out Invites
Next Story → Colin Powell Supports Marriage Equality, Says of Gay Friends: “They are as stable a family as my family is.”