Following a reported bomb threat, the Human Rights Campaign and other LGBT organizations in Washington evacuated their offices today. According to Fred Sainz, HRC’s vice president for communications, the Los Angeles Police Department received an unspecified bomb threat against a ”national gay rights organization,” which led the LAPD to notify the D.C. Metropolitan Police Department of the threat, which subsequently notified HRC and others.

An HRC email to staff quickly circulated among other groups, such as the National Gay and Lesbian Task Force, the National Black Justice Coalition and the Gay, Lesbian & Straight Education Network. 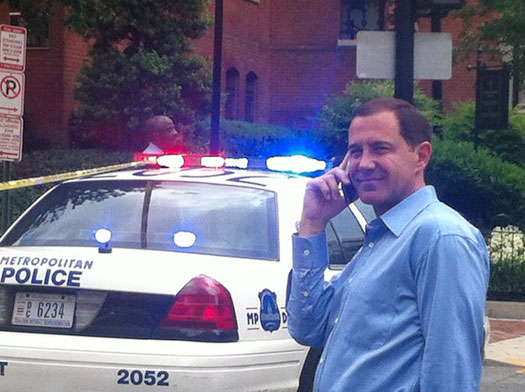 ”In the utmost of caution we are evacuating the building so that the police can conduct a sweep using the bomb-sniffing dogs,” that email, sent at 11:58 a.m., read in part. ”We need everyone to leave the building until further notice. We estimate that this will take at least an hour.”

With the surrounding block cordoned off, police vehicles surrounded the building and prevented pedestrians from approaching as teams led dogs in search of any threat. By 12:50 p.m., MPD called the all-clear and people began re-entering the building.

HRC President Joe Solmonese, returning to the building, said this was the second time that the headquarters, at 17th Street and Rhode Island Avenue NW, had been evacuated since he began as president in March 2005. The other evacuation occurred during the August 2011 earthquake, ”When we thought it really was a bomb,” said Solmonese, due to leave HRC in June.

A few blocks away, at the building that houses the National Gay and Lesbian Task Force and the National Center for Transgender Equality, at 1325 Massachusetts Ave. NW, as well as several other non-LGBT entities, staff waited outside as police began searching that address at about 1 p.m.

Darlene Nipper, the Task Force’s deputy executive director, standing among the crowd seemed to take the threat in stride. ”It’s an indeterminate threat,” she said, adding the organization would rather err on the side of caution.

At The DC Center, the city’s LGBT community center, Executive Director David Mariner said he was in touch with MPD’s Gay and Lesbian Liaison Unit (GLLU). Although a local organization, Mariner said the GLLU advised him that officers would be inspecting the center, at 1318 U St. NW, later today.

[UPDATE, 2:40 p.m.: MPD added that two other organizations, the National Gay and Lesbian Chamber of Commerce at 729 15th St. NW and the GLLU office at 1369-A Connecticut Ave. NW were also evacuated. No hazardous materials have been found at any of the sites.]

[UPDATE 5:10 p.m.: Karen Ocamb of the L.A.-based LGBT/POV blog, after speaking with LAPD media relations, reports that the threat was made via payphone “through the 911 system from a caller who stated that he was going to blow up the LGBT building in Washington, D.C.” The LAPD spokesperson, Detective Gus Villanueva, told Ocamb the call was made at 8 a.m. Pacific Time, but could not release the location of the payphone.]

Will O’Bryan and John Riley contributed to this report.