With the City Council’s unanimous passage of the Youth Bullying Prevention Act of 2012 earlier this month, this morning saw Act 2, as Mayor Vincent Gray (D) signed the bill into law – 30-day congressional review notwithstanding – before a warm room full of sweaty witnesses who braved the heat wave to attend.

”I am proud to say that today we’re taking yet another bold and concrete step toward eradicating bullying in our city,” the mayor told the crowded audience of about 70 people. ”The Youth Bullying Prevention Act of 2012 immediately authorizes a task force to develop a citywide anti-bullying model policy that will cover the places where youth are often the targets of bullying. In our schools, parks, libraries, in our public spaces.” 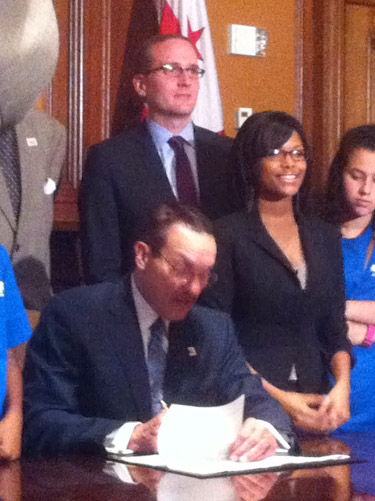 Gray added bit of bureaucratic humor, eliciting laughs, at the upbeat event: ”And, yes, they will finish their work in our lifetime.”

Many of those task force members were on hand to celebrate the signing, including Metropolitan Police Chief Cathy Lanier; Jeffrey Richardson, director of the Mayor’s Office of GLBT Affairs; and David Mariner, executive director of The DC Center, the city’s LGBT community center. The Task Force will be comprised of heads of D.C. agencies, as well as representatives from a number of advocacy organizations of both local and national stature, such as D.C.’s Sexual Minority Youth Assistance League (SMYAL) and the New York-based Gay, Lesbian and Straight Education Network (GLSEN).

Although the Human Rights Campaign (HRC) has not been tapped to join the task force, the nation’s largest LGBT-advocacy organization, with headquarters in D.C., has assisted the city in anti-bullying efforts. Chad Griffin, who took the helm of HRC last week, also spoke at this morning’s signing ceremony.

”Today really is a landmark day for our city’s youth,” said Griffin, noting that his first duty in the new job was releasing HRC’s Growing Up LGBT in America report last week. ”When you look across the country, the legislation about to be signed into law is the most robust in the nation, not only protecting young people in school, but in all agencies across the city that serve our youth. But laws can be more than words on a page. They can send a powerful message. Today, that message rings loud and clear. The fact that we’re standing here today, that the mayor will soon sign this bill into law, tells every LGBT young person – not just in D.C., but around the country – that they have value and that they have reason to be hopeful.”

”It shouldn’t matter how tall you are, how short you are, what your orientation is, what color your skin is, what language you speak,” Brown said, recalling that he brought the anti-bullying effort to then-Chairman Gray, who asked to co-sponsor the legislation. ”You should not be teased or bullied in any form or fashion. There should be zero-tolerance policy in this city related to that. And we are going to do that with this law.”

Over the lectern, Wells spoke directly to some Columbia Heights kids attending the signing as part of their participation in a D.C. Department of Parks and Recreation summer program.

”This is a part of our city showing how much your city loves you, cares about you and wants to see you have a great, protected future,” Wells told the youths.

D.C. Public Schools Chancellor Kaya Henderson asked the adults in the room to heed the spirit of the new law, a comprehensive plan for combating bullying across all corners of the city, with their own behavior.

”Every day we have opportunities to show how to treat each other with respect and civility,” she said. ”Many times we miss the mark. We wonder why children are bullies, and that is because a lot of times they see adults doing the bullying.

”This legislation is not just about creating an environment in schools or in libraries or in parks and recreation centers. But this is about, beginning with each and every one of us, being introspective about how we treat each other so that we can be good examples for our young people.”

Bullying has directly impacted D.C. co-Youth Mayor Cecelia Thompson, who told the audience of being teased through elementary school for being studious. She said the new law will ”help create an environment where youth can focus their attention on learning and achieving instead of worrying about their safety or being labeled.”

D.C. Office of Human Rights Director Gustavo Velasquez, whose office will coordinate the task force, said, ”As someone who was bullied and who, sadly but true, was a bystander of bullying, this is an extraordinary day and promising future.”

Gustavo also thanked a principal partner in getting to this stage in combating bullying in the District: Shannon Cuttle.

Cuttle, executive director of the Safe Schools Action Network, is leading the task force and the implementation of the anti-bullying action plan. After the ceremony, she talked briefly about two components that have made safe schools her primary cause.

”I’ve been working on trying to make safe schools a priority in the District of Columbia since 2010,” said Cuttle, a lesbian and a former teacher. Some of that effort follows an experience about a decade earlier in an affluent Detroit suburb. In that time and place, she taught kindergarten at a private school. One of her students had two fathers, prompting the Parent-Teacher Association at the school to institute a policy barring the fathers from picking up or dropping off their daughter at school together. Too confusing for the other children, the PTA decided.

”It was my first year teaching, and I had my first same-sex family,” Cuttle recalled. ”I’d gone to my headmaster, I questioned [the policy]. I was sat down and told not to worry about it. Over the next several months, I advocated for the family, and the PTA kind of relented. It was a big learning experience. … We think of bullying as teasing or only among youth. What happened with those two dads was bullying.”

The other influencer was Mrs. Palicki, Cuttle’s fourth-grade teacher, who fully enforced the fairness groundwork begun by her parents.

”She taught us a sense of social justice, about community, how to treat each other,” Cuttle shared. ”She was the first person to instill – in all of us, all her students – that one person can make a difference and everyone should try. I very often, still, say that phrase.”