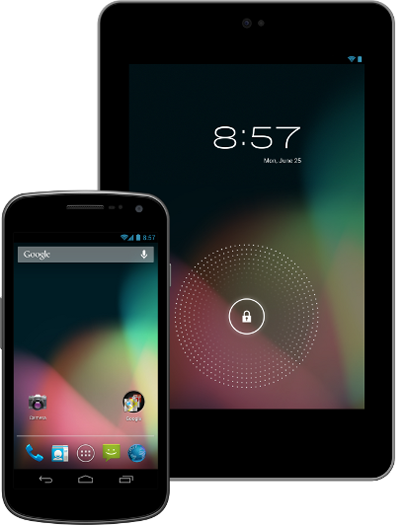 At today’s I/O developer conference, Google made official its latest update to the Android OS. Version 4.1, or Jelly Bean, aims to bring a smarter, faster, more engaging experience compared with Ice Cream Sandwich (4.0), announced at last year’s I/O conference. Speaking of last year, Google announced at the time that there were over 100 million active Android devices around the world. Now? That number is 400 million. Android devices are being activated at a rate of 1 million devices per day, with no sign of any slowdown in the near future.

As such, there’s a lot of pressure on Google to keep its OS up-to-date, and Jelly Bean delivered on most fronts. Spearheading development is Project Butter, the core of the changes made to the Android OS seeks to bring about great increases in speed, efficiency and touch response. The main UI, though relatively unchanged from 4.0, now runs at 60fps, utilizing vsync to drive the framework and triple buffering of the screen, CPU and GPU to keep everything in check. Touch responsiveness is also improved, with Jelly Bean now anticipating where a user’s finger will be when the screen refreshes to ensure better accuracy and faster response. Power management is also improved, with the CPU now going straight to full power the moment a touch is detected, to remove the latency that previously could be felt when a handset had cycled down to conserve power. All of these changes are to ensure that the occasional slowdown and stutter than can plague even the high-end Android devices becomes a thing of the past.

The main home screen has also seen improvements in the organization of a user’s content. Icons now actively reorganize around a widget when it’s placed on the home screen, and the widgets themselves now resize to fit in around existing content if there isn’t enough room in its original size. The Android keyboard has been updated with greater accuracy, as well as intelligent learning to study a users inputs and then utilize word prediction for faster typing — although these are features already available in many third-party keyboards.

Voice-typing has been improved so that in instances such as dictating an email or text, intelligent word-changes are implemented in sentences, employing the prediction software to change misunderstood words and reducing the number of changes a user must make to the finished text. The major change, however, is offline usage. With Siri, and previous versions of Voice, a constant internet connection is needed to process the users input. Google has shrunk their entire voice database into the Android OS, enabling those without signal or limited bandwidth to talk to their device as much as they please.

Search — Google’s hallmark — hasn’t been spared the updating. With Jelly Bean comes a new, cleaner UI, and an emphasis on card shortcuts to simplify information searches. When a user searches for something, Search will now show a card with a snapshot of information for the user. A search for weather in Washington will show a card with weather information on it. A search for films by Angelina Jolie will show her image, and a list of films pulled from Wikipedia. These cards aim to streamline the search process, but can be quickly swiped to the side to show the traditional google search results. Voice search takes a new form as well, with users able to ask normal questions and the device answering in tune. Ask “Who is the President of the U.S.?” and the phone will show a card of Barack Obama and key facts about his presidency, as well as saying “The President of the United States is Barack Obama.” It’s all very Siri-esque, but with a much deeper focus on the end result of the search.

It all ties directly into Google Now, which takes the search and location history and data from the calendar stored on the handset and the user’s Google account, and uses it to streamline the information they receive from the device. If a user asks the phone to show sports scores, it knows they have searched previously for the Redskins, and will display a card with the latest Redskin game scores. If a game is taking place later that day, it’ll check if you have any calendar events that could clash and let you buy tickets. If a user walks up to a bus stop or train station, and the phone recognizes that they regularly use public transport, it’ll pull up the timetable and tell you when the next bus or train is, and how long the journey will take. If you’re in a part of town on your lunch-break, the phone will pull in Google Places reviews for the restaurants you walk past, allowing you to see reviews and book a table. Calendar events will tell you the quickest way to get to where you need to be, such as showing a bus timetable, telling you when to leave for the bus station, and how long the journey will take. If you regularly go to the gym at lunch, but have a flight to catch that afternoon, Google Now will tell you the status of your flight, how long you’ll need to get to the airport, where to check-in and what terminal to go to. If it’s delayed it’ll tell you if it’s possible to squeeze in a quick workout, and direct you accordingly. It’s powerful, useful stuff, and goes far beyond the “personal assistant” Apple touts Siri to be. Google promises its functionality will be constantly updated, and its information will improve with continued usage. The more you use it, the more useful it will be.

Android’s notification system, long the most useful and full-featured of the major mobile OS’s — and famously borrowed by Apple to replace the much-derided system in iOS — has been imbued with even greater function. Notifications are now more customizable, with the user able to select what apps are shown and how much they show. A simple, two-finger pull down on any notification will double its size, showing more information — a Gmail notification could show the first four emails, a missed call notification can provide options to call back or message, an event can be dismissed or the participants emailed if the user is delayed. Photos are now also included, showing a contact photo or the headline picture from a breaking news story. Content can be shared directly from a notification, or +1’d and Liked.

The camera app has been improved, with a new Window Phone-esque ability to take a photo and then swipe the screen to pull it back into view for sharing or editing. Also included is the ability to pinch the screen, zooming out to a filmstrip view, where users can simply swipe a photo upwards to erase it (an undo function is included for any mishaps).

All told, it’s a comprehensive update, focusing on Android’s strengths — search, speed, customization and notifications — albeit without introducing any radical new additions. The exception is Google Now, which has the potential to transform the way a user interacts with their device, but its application in the real world among average users remains to be seen.

Jelly Bean will be rolled out to Galaxy Nexus, Nexus S and Motorola Xoom devices in an OTA update mid-July. It will also be released to manufacturers at that same date, and the developers SDK is available now.

Of interesting note was Google’s rather quiet announcement that the PDK, or platform development kit, would now be released to certain device manufacturers 3 months before the release of a new version of Android. This, Google hopes, will reduce the delays that plague Android between a new version being released, and manufacturers customizing it to their handsets. Also announced was the news that select manufacturers had already been given the Jelly Bean PDK, so it remains to be seen if it will speed up the distribution of Android 4.1 to today’s devices — although given that many people are still waiting for Ice Cream Sandwich, some 8 months after its release, it remains to be seen if any improvements will be made.