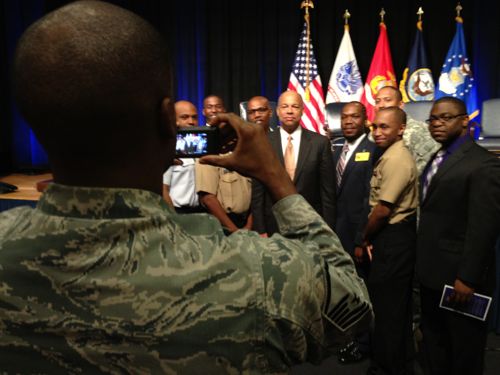 Heading to the Pentagon today was “spectacular” for Ronnie Bryant.

The first-ever Pentagon LGBT Pride Month Event (transcript here), featuring a keynote address by Defense Department general counsel Jeh Johnson, took place at 1 p.m. today in the Pentagon auditorium. The auditorium, which seats 350, was packed, and the servicemembers, advocates and others in attendance also heard from a panel that included stories of past and present lesbian and gay service.

Talking with Metro Weekly after the event, Bryant, who retired from the armed forces after 20 years of service in the U.S. Army, said of today’s event, “A few times I had to stop myself from crying. Just to have these young folks serve, openly — be able to place a photo of a loved one. I had to lie.”

Explaining how directly the policy had impacted him, he said, “I had my partner with me … at promotion ceremonies and other events, but each time, I had to say, ‘This is my brother,’ and not my lover.”

Today, Johnson, the Defense Department’s top in-house lawyer, acknowledged the change that the end of “Don’t Ask, Don’t Tell” meant to the military.

“For those servicemembers who are gay and lesbian, we lifted a real and personal burden from their shoulders. They no longer have to live a lie in the military,” he told the attendees. “They will no longer have to somehow teach a child to lie to protect her father’s career. As one Army chief warrant officer reported, her commander told her, ‘This policy kept me from knowing you.'”

The policy’s end came about, however, only after Johnson and Gen. Carter Ham served as the co-chairs of the Pentagon’s 2010 working group that examined the effects of repeal and best ways to implement a repeal if it happened. Johnson spoke today about that effort — which at times drew criticism from LGBT advocates — noting, “I do not consider myself an activist on the matter of gay men and women in America.”

Nonetheless, Johnson said, “By the end of the 10-month study — during which I think we actually saw attitudes shift as we stirred the pot on this issue — we had the overwhelming sense that, with proper education and leadership, the military could be ready for this change.”

Johnson then looked at the implementation of repeal following the Dec. 22, 2010 signing of the Don’t Ask, Don’t Tell Repeal Act and Sept. 20, 2011, end of the law, asking, “How has the military accepted this change?”

Answering his question, he told the audience, “Better than we anticipated,” adding, “I attribute this to the strength of our military and its Army, Navy, Air Force and Marine leadership.”

One of those attending, Air Force Reserves Major Jim Hatt, told Metro Weekly that his day-to-day work life at the Pentagon hasn’t changed. “No difference,” he said. “Life hasn’t changed.”

But, he added, “It’s changed inwardly for me.”

Looking at the crowd in the auditorium, he said, “I never thought I would see this day. I never thought it would be something where I didn’t continually hide and lie and cover and be very cautious about what I did and said. I guess the big change is that there’s this huge elephant that is no longer on my back.”

As for the purpose of today’s event — the Pentagon’s recognition of LGBT Pride Month — Hatt admitted a little surprise. “I was not even expecting this, after the end of ‘Don’t Ask, Don’t Tell,’ for another two, three, maybe four, five years,” he said. “So, this is a huge surprise.”

Bryant was enjoying the changed atmosphere from when he served, being one of several servicemembers and veterans who took the opportunity after the event to thank Johnson for attending and for his work leading to and implementing DADT repeal.

“It is a little unfortunate for me because I served under both the ban and ‘Don’t Ask, Don’t Tell,'” he said after talking with Johnson. “But it’s good for the new generation, and I appreciated all the kind words he had to say.”

As Johnson acknowledged, though, more work remains to be done to ensure that lesbian and gay servicemembers are treated equally: “The repeal of ‘Don’t Ask, Don’t Tell’ exposes certain inequalities between similarly situated couples in the military community. This troubles many of our leaders.”

Johnson noted that the Defense of Marriage Act limits the full equal treatment of LGB servicemembers, but said that “the personnel and readiness community is now in the midst of reviewing which military family benefits can be extended to the partners and other family members of gay and lesbian servicemembers.” Although he also acknowledged that the benefits review has taken a significant amount of time — which has led to some criticism from Servicemembers Legal Defense Network — Johnson said, “[T]he process has been comprehensive and time-consuming, but it will get done.” 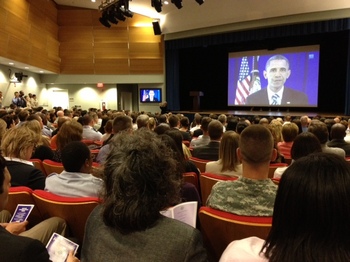 In the panel discussion that followed Johnson’s address, Air Force principal deputy general counsel Gordon Tanner — who spoke of “the fear” he had that he “would be outed” when he was in the Air Force — noted that the Pentagon’s civilian employees already are working on advancing similar benefits to those being examined on the servicemembers’ side, saying, “I have this laundry list of all the civilian benefits that we have now are working on getting, and [already] have some.”

Of the application of those benefits to servicemembers, Tanner said, “We in the Pentagon here are often face to face with the policymakers, the people who are looking at the benefits and how those can be increased so that we have one class of Marines, and not first- and second-class Marines — or airmen or sailors or soldiers. We can be there for the policymakers.”

When asked after the event about the benefits review, Johnson told Metro Weekly, “It’s coming along. We’ll get it done.” Asked when, Johnson said, “You’ll have to ask Secretary [Erin] Conaton.” Conaton was confirmed by the Senate as undersecretary of defense for personnel and readiness on June 8, and Metro Weekly requested follow-up information on the question this evening.

Not mentioned by any of the speakers at the event, which was billed as a “Lesbian, Gay, Bisexual, Transgender Pride Month Event,” was the military’s ongoing ban on out transgender service.

Sue Fulton, who is a graduate of and now serves on the Board of Visitors for the U.S. Military Academy at West Point, and Marine Corps Capt. Matthew Phelps were the second and third members of the event’s panel, with Fulton talking about the service academies and Phelps speaking of his experience serving in the military since joining up after the attacks of Sept. 11, 2001.

“When the repeal happened, on Sept. 20, 2011, it came at an interesting point in my career. I already had been selected as a company commander,” Phelps said. “I went in to work on the 20th of September thinking that my life was going to change. I went in, and I sat down at my desk, and I kind of braced myself on the desk, waiting for everyone to come and ask me if I was gay,” he said to laughter.

“Believe it or not, nobody did.” More laughter.

After the event, with military officials looking on, Phelps and his boyfriend, Ben Schock, took a photo together.

Phelps as a Marine, in uniform. The couple together, at the Pentagon.