''Spring Awakening'' is filled with sex and abuse and sadism and abortion, agitated with rock and folk courtesy Duncan Sheik

To be a teenager is to feel overwhelmed. It’s lonely. All sorts of oily, crunchy, hairy things happen to your body. You can’t stop thinking about that one hottie in your history class, with the tight pants and mesmerizing charisma and the million-dollar grin. You get dreams… wet ones. There’s an impossible weight to everything – a yearning for sexual and personal independence in a world that seems tailor-made to repress and restrict – and, to borrow a line from playwright Steven Sater, it’s totally fucked.

Spring Awakening, the Tony Award-winning musical that launched Lea Michele from Broadway to Glee fame, is Sater’s ode to that teen angst. Adapted from a controversial 1892 play of the same name — with the added musical flair of Duncan Sheik — it’s filled with sex and abuse and sadism and abortion, agitated with rock and folk sensibilities, then dumped into a provincial, late-19th century German town. 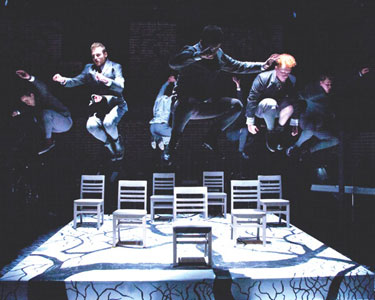 Despite that anachronism, the rock musical’s resident teens are of a traditional variety: Wendla (Ali Hoxie), a saucer-eyed girl recently come of age; Melchoir (Vincent Kempski), a heartthrob malcontent who disdains the constraints of strict education; Moritz (Paul Scanlan), Melchior’s close friend and a neurotic tangle of nerves and hormones; Isla (Nora Palka), a bohemian waif turned out by her abusive father; Hanschen (Gannon O’Brien), an arrogant seducer; and Ernst (Alex Alferov), his innocent target.

They’re paired up and thrown through sexual obstacles, all while forced against the constraints of an adult society hell-bent on ignoring their anxieties. To say the least — and, as some of you may know from unfortunate experience — that’s not a formula for happy endings.

But a decent number of D.C. theatergoers probably knew that already. Spring Awakening first landed in Washington way back in 2009, during the national tour’s run at the Kennedy Center. Despite the three-year gap, though, the Keegan Theatre pulls off a worthy reprise of the Broadway hit. At its best, the Keegan’s production is as angry and gnashing as this kind of story deserves to be — while it’s hard to call a musical that’s been this successful a rebellious thing, it’s a delightful kind of immature revolution. The cast storms through earworms like “The Bitch of Living” and “Momma Who Bore Me (Reprise)” with a burning outrage that’s so exhilarating and passionate, the rest of the show lacks vigor by contrast. The highs are ecstatic and the lows are dismal, and there’s rarely a moment in between.

And that’s the consequence of a big risk made by directors Mark A. Rhea and Susan Marie Rhea: The cast of Spring Awakening is littered with young, local actors — many of them fresh out of college — and as a result, moments that demand nuance occasionally falter under unseasoned performances. Still, it’s a worthwhile gamble that pays off more often than not. Hoxie’s innocence radiates throughout the show, emphasizing Wendla’s incomplete transition to womanhood. Kempski’s youthful vigor is on full display in “Totally Fucked,” the production’s best-realized song, even if that excitement only appears in fits and starts during the first act.

Ultimately, though, the show hinges on Scanlan’s thrilling turn as Moritz. In the somber, pious moments ill-suited for this cast, Scanlan’s a hearty shot in the arm, a necessary reminder of the awkward, uncomfortably loud flaws of adolescence. It’s as if he’s from another more intense musical, born entirely out of teenage anxiety without the lesser tiring bits.

In an unfulfilled way, perhaps, that’s the point of Spring Awakening. We’re meant to recognize the intensity of teenage logic, but only after shattering the lens of adult perspective. This is a play where thoughtful ruminations about life, friendship and death generally fall flat, but the expletives about social restraint inspire furious yelps of joy. Leave adulthood for the old people. These unbelievable passions are for the eternally young.

Even if we forget what it was like, these feelings are forever. That, after all, is why Spring Awakenings transcends everything from modern musical to 19th century theater. This has all happened before, and this will all happen again, but it won’t happen just like this ever again.

Unless it comes back to D.C. for a third time.