Home / News + Politics / Poliglot / Obama Urges Support For Maryland Marriage Bill; O’Malley Vows to “Do All He Can,” Spokeswoman Says

Obama Urges Support For Maryland Marriage Bill; O’Malley Vows to “Do All He Can,” Spokeswoman Says

Marriage equality supporters in Maryland got a boost from President Obama, who told a crowd at Baltimore’s Hyatt Regency hotel on Tuesday, June 12, that they should vote in favor of the state’s recently passed marriage equality law, calling it “the right thing to do.” 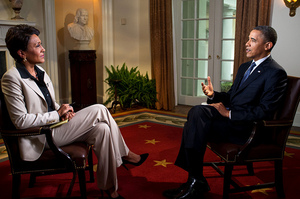 The move is the first time the president has spoken out in favor of a specific state’s marriage equality vote in a public setting and comes a little more than a month after he announced his personal support for marriage equality.

In past instances, in North Carolina, Minnesota, Maine and Washington, spokespersons made statements expressing opposition to the anti-equality position but the president himself did not speak out on the state’s vote specifically. And, in California in 2008, Obama wrote a letter to the Alice B. Toklas Lesbian Gay Bisexual Transgender Democratic Club expressing his opposition to the initiative.

On Tuesday, though, Obama told the crowd, “We’re not going back to the days when you could be kicked out of the United States military just because of who you are and who you love. We’re moving forward to a country where we treat everybody fairly and everybody equally, with dignity and respect.”

Then, referencing the upcoming referendum vote that is expected on the marriage equality bill in Maryland, he said, “[H]ere in Maryland, thanks to the leadership of committed citizens and Governor [Martin] O’Malley, you have a chance to reaffirm that principle in the voting booth in November. It’s the right thing to do.”

“The governor will do all he can to ensure human dignity and religious freedom will prevail,” Winfield said when asked about O’Malley’s feelings on the referendum. “He believes the people of Maryland will choose dignity at the polls in November.”

Following the president’s remarks, Josh Levin, campaign manager for Marylanders for Marriage Equality, the coalition seeking to uphold the law, issued a press release thanking Obama for highlighting the referendum in his remarks.

“Voters identify with his journey on the issue and are re-thinking their own position on same-sex marriage,” Levin said in the statement thanking Obama. “A strong majority already realize this is about treating gays and lesbians fairly under the law and about dignity for all Maryland families, not just some families. The President’s history-making leadership on marriage equality has inspired new conversations around kitchen tables and in church pews, not just in Maryland but all over the country.”