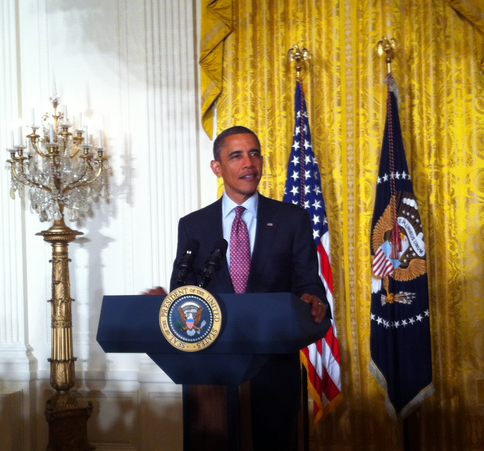 Today, for the fourth time, President Obama hosted members of the LGBT community and their allies for a White House LGBT Pride Month reception.

Today, for the first time, Obama was able to look out into the crowd and see out servicemembers in uniform and with their spouses or partners.

Referencing the end of “Don’t Ask, Don’t Tell,” which was about nine months ago on Sept. 20, 2011, Obama said, “I know we’ve got some military members who are here today,” to applause.

One of those servicemembers present was Chief Warrant Officer Charlie Morgan, a member of the New Hampshire National Guard and a plaintiff in the Servicemembers Legal Defense Network case, McLaughlin v. United States.

The Obama administration, in conjunction with the February 2011 decision that Section 3 of the Defense of Marriage Act is unconstitutional, is not defending the lawsuit and concurs with SLDN that the plaintiffs’ view should prevail.

Morgan, who is battling incurable stage IV breast cancer, visited Capitol Hill earlier this year to meet with the staff of Speaker John Boehner (R-Ohio) to ask his office not to intervene to defend DOMA in McLaughlin — a request Boehner declined, as he did intervene to defend the 1996 law in the case.

Morgan is suing to ensure that her wife, Karen, would be entitled to survivor’s benefits, social security benefits and health insurance coverage should Morgan not survive her fight with cancer.

Of the invitation to today’s event, however, Morgan was in good humor.

Asked why she was putting such effort into fighting the lawsuit and questioning elected officials in the midst of her own personal struggles, Morgan said, “I’m trying to stand up for all we believe in in this country.

“We’re soldiers to stand up for and protect our freedoms, so it’s easy.”

READ Obama’s comments below the jump.

Office of the Press Secretary

REMARKS BY THE PRESIDENT

THE PRESIDENT:  Hello, hello, hello!  (Applause.)  Thank you.  Thank you, everybody.  Thank you so much.  Well, thank you very much.

Well, welcome to the White House, everybody.  (Applause.)  We are glad all of you could join us today.  I want to thank the members of Congress and the members of my administration who are here, including our friends who are doing outstanding work every day — John Berry, Nancy Sutley, Fred Hochberg.  (Applause.)

Now, each June since I took office, we have gathered to pay tribute to the generations of lesbian, gay, bisexual and transgender Americans who devoted their lives to our most basic of ideals –- equality not just for some, but for all.  Together we’ve marked major milestones like the 40th anniversary of the Stonewall riots, when a group of brave citizens held their ground against brutal discrimination.  Together, we’ve honored courageous pioneers who, decades ago, came out and spoke out; who challenged unjust laws and destructive prejudices.  Together, we’ve stood resolute; unwavering in our commitment to advance this movement and to build a more perfect union.

Now, I’ve said before that I would never counsel patience; that it wasn’t right to tell you to be patient any more than it was right for others to tell women to be patient a century ago, or African Americans to be patient a half century ago.  After decades of inaction and indifference, you have every reason and right to push, loudly and forcefully, for equality.  (Applause.)

For every person who lost a loved one at the hand of hate, we ended a decade of delay and finally made the Matthew Shepard Act the land of the law.  (Applause.)  For every person with HIV who was treated like an outcast, we lifted the HIV entry ban.  (Applause.)  And because of that important step, next month, for the first time in more than two decades, the International AIDS conference will be held right here in the United States.  (Applause.)

For every American diagnosed with HIV who couldn’t get access to treatment, we put forward a National HIV/AIDS strategy — because who you are should never affect whether you get life-extending care.  Marjorie Hill, the head of the Gay Men’s Health Crisis, is here.  (Applause.)  GMHC has saved so many lives, and this year they are celebrating their 30th anniversary.  So I want to give them and all these organizations who work to prevent and treat HIV a big round of applause.  Give it up for Marjorie and everybody else.  (Applause.)

For every partner or spouse denied the chance to comfort a loved one in the hospital, to be by their side at their greatest hour of need, we said, enough.  Hospitals that accept Medicare or Medicaid -– and that is most of them -– now have to treat LGBT patients just like any other patient.  For every American denied insurance just for being lesbian, gay, bisexual or transgender, we passed health insurance reform, which will ban that kind of discrimination.  (Applause.)

We’ve expanded benefits for same-sex partners of federal employees, prohibited discrimination on the basis of gender identity for workers in the federal government.  (Applause.)  We’ve supported efforts in Congress to end the so-called Defense of Marriage Act.  (Applause.)  And as we wait for that law to be cast aside, we’ve stopped defending its constitutionality in the courts.  (Applause.)

We’ve put forward a strategy to promote and protect the rights of LGBT communities all over the world, because, as Secretary Clinton said back in December, gay rights are human rights.  (Applause.)

And, of course, last year we finally put an end to “don’t ask, don’t tell” — (applause) — so that nobody would ever have to ever again hide who they love in order to serve the country they love.  And I know we’ve got some military members who are here today.  (Applause.)  I’m happy to see you with your partners here.  We thank you for your service.  We thank your families for their service, and we share your joy at being able to come with your spouses or partners here to the White House with your Commander-in-Chief.  (Applause.)

Now, we know we’ve got more to do.  Americans may feel more comfortable bringing their partners to the office barbecue — (laughter) — but we’re still waiting for a fully inclusive employment non-discrimination act.  (Applause.)  Congress needs to pass that legislation, so that no American is ever fired simply for being gay or transgender.

Americans may be able serve openly in the military, but many are still growing up alone and afraid; picked on, pushed around for being different.  And that’s why my administration has worked to raise awareness about bullying.  And I know — I just had a chance to see Lee Hirsch, the director of BULLY, who is here.  And we thank him for his work on this issue.  (Applause.)

I want to acknowledge all the young leaders here today who are making such a big difference in their classrooms and in their communities.  And Americans may be still evolving when it comes to marriage equality — (laughter and applause) — but as I’ve indicated personally, Michelle and I have made up our minds on this issue.  (Applause.)

And as long as I have the privilege of being your President, I promise you, you won’t just have a friend in the White House, you will have a fellow advocate — (applause) — for an America where no matter what you look like or where you come from or who you love, you can dream big dreams and dream as openly as you want.