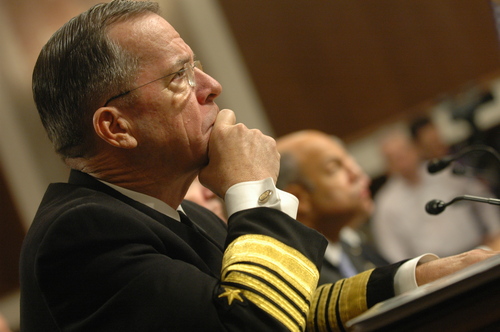 On Sept. 18, retired Admiral Mike Mullen, the former chairman of the Joint Chiefs of Staff, will join Servicemembers Legal Defense Network aboard the USS Intrepid in New York City to mark the one-year anniversary of the end of “Don’t Ask, Don’t Tell,” the group is telling supporters today.

In an email being sent to supporters today, SLDN executive director Aubrey Sarvis wrote of the fundraising event, “This historic and emotional event presents a unique — indeed, a once in a lifetime — opportunity to reinforce the meaningful part that Admiral Mullen played in the DADT repeal process.”

Mullen took the lead on making the case to Congress to repeal DADT, telling the Senate Armed Services Committee on Feb. 2, 2010, that he supported repeal — and made a moral case for doing so.

“Speaking for myself and myself only, it is my personal belief that allowing gays and lesbians to serve openly would be the right thing to do,” he told the committee. “No matter how I look at this issue, I cannot escape being troubled by the fact that we have in place a policy that forces young men and women to lie about who they are in order to defend their fellow citizens. For me, personally, it comes down to integrity: Theirs as individuals and ours as an institution.”

Of the troops, Mullen added: “I also believe that the great young men and women of our military can and would accommodate such a change. I never underestimate their ability to adapt.” 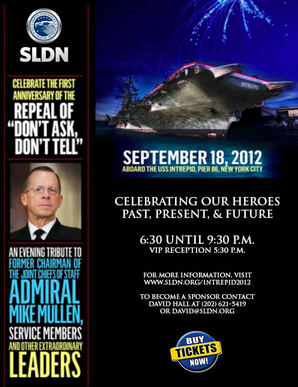 The strong, personal statement by Mullen set the tone for the debate, standing in stark contrast to statements by previous military commanders, including then-chairman of the Joint Chiefs of Staff Colin Powell during the 1993 debate that led to the passage of DADT.

When President Obama signed the Don’t Ask, Don’t Tell Repeal Act into law on Dec. 22, 2010, it was Mullen who received some of the loudest applause at the event. Of his leadership, Obama thanked him, saying Mullen “spoke from the heart and said what he believed was right.”

Vice President Joe Biden, who introduced Obama, had made the first comments at the signing about Mullen, saying, “I want to pay particular respect, just as a personal note — as we used to say, I used to be allowed to say in the Senate, a point of personal privilege — Admiral Mullen, you’re a stand-up guy.” When he did so, the applause was such that Biden first told Mullen, “I think they like you,” and then, when the applause continued, affectionately told the attendees of the signing, “He already has enough power. Don’t.”

Mullen continued to lead on the issue during the implementation period, signing the certification on July 22, 2011, that the military was ready for repeal, which then took place on Sept. 20, 2011.

The event, which SLDN spokesman Zeke Stokes says will be a fundraiser for SLDN, will be the lead event of a week of events by the group to mark the anniversary.