Home / News + Politics / Poliglot / The DOMA Lawsuits: What Is Happening?

The DOMA Lawsuits: What Is Happening?

The Defense of Marriage Act has taken several hits in recent weeks. The federal definition of “marriage” and “spouse” has been found to be unconstitutional in the U.S. Court of Appeals for the First Circuit, a trial-court case striking it down is on appeal before the Ninth Circuit, and federal trial-court judges in California and New York struck down Section 3 as well.

So, on the afternoon of Monday, June 18, where do these — and three other pending federal trial-court cases — stand?

Gill v. Office of Personnel Management and Massachusetts v. Department of Health and Human Services: These two cases, decided by the First Circuit on May 31, are waiting on a filing by the Department of Justice and/or the House Bipartisan Legal Advisory Group to the Supreme Court asking the high court to hear the case. 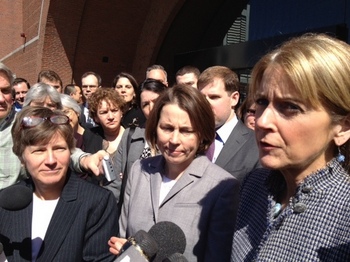 Because the constitutionality of a federal statute is at issue and because Attorney General Eric Holder has told House Speaker John Boehner (R-Ohio) that the federal government will continue to enforce DOMA until a final court ruling as to its constitutionality, DOJ likely will file the formal request that the court hear the case, a petition for a writ of certiorari, and, in so doing, assert its view that the First Circuit decision striking down the law as unconstitutional was correct (although perhaps for different reasons than given by the First Circuit). BLAG could attempt to do so as well, although some might challenge its legal authority to do so.

The cert petition must be filed within 90 days of the May 31 appellate decision, which gives DOJ and BLAG an August 29 deadline for the Supreme Court filing.

After the cert petition is filed, a cross-petition for certiorari — by BLAG, for example, in order to assert its rationale that the case should be taken so that the Supreme Court can reverse the First Circuit’s decision — could be filed by any party within 30 days of the petition’s filing. Parties opposing the cert petition likewise have 30 days to file their opposition. The plaintiffs, Massachusetts and other interested individuals and organizations will be able to give their input as to whether the court should take the case.

The court then will consider whether it wants to take the case, a question it is expected to answer in the affirmative as the constitutionality of a federal statute is at issue. It could, however, hold the case in order to await a decision on one of the further DOMA challenges.

Golinski v. Office of Personnel Management: This case, an appeal from U.S. District Court Judge Jeffrey S. White’s Feb. 22 trial-court opinion striking down the law, is being briefed before the Ninth Circuit — with views by former U.S. attorneys general and others already submitted to the appeals court.

Oral arguments before the Ninth Circuit have been scheduled for the week of September 10.

Windsor v. United States: DOJ filed a notice of appeal in the case in which U.S. District Court Judge Barbara Jones found Section 3 of DOMA unconstitutional on June 6. The DOJ’s initial notice, which will send the case to the Second Circuit, was incorrectly filed and was resubmitted on June 14. DOJ, despite the filing, had argued in favor of Edith Windsor’s lawsuit challenging an estate tax bill of more than $350,000 that Windsor would not have had to pay if her deceased wife had been a man. BLAG is defending DOMA in the case.

Dragovich v. Department of Treasury: No notice of appeal has been filed from this May 24 decision, which involves both state and federal defendants due to the specific DOMA-impacted law — affecting tax treatment for a California-offered long-term care plan — being challenged. The plaintiffs, who plan to seek to recover attorneys fees, have sought and been granted an extension until August 22 to file the attorneys fees request, but an attorney for the plaintiffs told Metro Weekly that does not impact the time to file a notice that the case is being appealed to the Ninth Circuit.

Neither DOJ nor BLAG representatives responded this afternoon to Metro Weekly‘s request for information regarding why the Windsor decision already has been appealed despite the Dragovich decision having been released more than two weeks earlier. The notice of appeal, because the United States is a defendant, must be filed within 60 days of the May 24 decision, which would be July 23.

McLaughlin v. Panetta and Cooper-Harris v. United States: These two cases are addressing the constitutionality of different military and veterans’ benefits given to married, same-sex couples. Although additional laws regarding veterans’ benefits are challenged in these cases in addition to DOMA Section 3, DOJ has informed Congress that it views these statutes as similarly unconstitutional.

On June 6, DOJ was granted a request in McLaughlin to stay the case, or put it on hold, until the final mandate is issued by the First Circuit in the Massachusetts case. BLAG is seeking a similar delay in Cooper-Harris, asking the court to stay the proceedings until a decision in Golinski, but the Southern Poverty Law Center, representing Cooper-Harris, is opposing the request. A hearing is set on the motion for July 2. [SPLC’s Christine Sun tells Metro Weekly the hearing has been moved to July 23.]

Pedersen v. Office of Personnel Management: This case is pending in federal trial court in Connecticut. It has been fully briefed, and the parties are awaiting a decision.

NOTE: Additional DOMA and DOMA-related challenges are noted in this chart (pdf) produced by Gay & Lesbian Advocates & Defenders, which has brought the Gill and Pedersen cases.