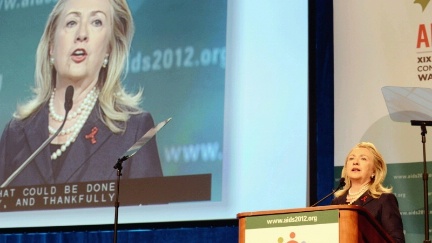 Speaking to thousands of delegates attending the XIX international AIDS Conference Monday morning, Clinton and HIV/AIDS advocates shared stories of sucesses in research, prevention and treatment of HIV and their vision of “an AIDS-free generation.”

In keeping with the theme of this year’s conference, which was “Turning the Tide” against the disease, the speakers focused on positive developments and promising scientific advances that could help in the development of a vaccine or cure for the disease. But, positive attitudes aside, they also warned the activists in attendance that much work is left to be done.

“Part of the reason we’ve come as far as we have is because so many people all over the world have not been satisfied that we have done enough,” Clinton said in addressing the conference’s delegates. “And I am here to set a goal for a generation that is free of AIDS.”

Specifically, Clinton focused on defining “an AIDS-free generation” that begins with no child being born with the virus, then access to quality treatment for those who may later become infected that helps prevent them from developing AIDS and passing the virus to others.

“I know that many of you share my passion about achieving this goal,” Clinton told the audience. “In fact, one could say I am preaching to the choir. But right now I think we need a little preaching to the choir. And we need the choir and the congregation to keep singing, lifting up their voices, and spreading the message to everyone who is still standing outside. … This is a fight we can win. We have already come so far – too far to stop now.”

Clinton also announced three new monetary efforts to reach key populations: $15 million, to go towards implementation research to identify specific interventions that are the most effective for at-risk populations, and $20 million to support country-led plans to expand HIV services.  She also pledged $2 million to help civil society groups that do outreach in those communities.

Prior to Clinton’s speech, Dr. Anthony Fauci, director of the National Institute of Allergy and Infectious Diseases, reviewed the history of HIV and the epidemiology of the disease. Both Fauci and Clinton mentioned biomedical and behavioral intervention advances that showed progress on combating HIV/AIDS, including sucesss in having adult males get circumcised; the success of antiretrovirals, with particular emphasis on the successes in treating HIV-positive pregnant women, who give birth to seronegative children; and the success of microbicides and pre-exposure prophylaxis (PrEP), which, when used correctly, seem to be successful in reducing the incidence of HIV.

Phill Wilson, founder and executive director of the Black AIDS Institute, described the situation in the United States, particularly the struggles facing black men who have sex with men (MSM), among whom HIV infection rates are rising rapidly. He also raised issues of funding for and access to quality health care, which is one of the factors driving the epidemic, especially among young people, the black community, and communities with a high incidence of poverty. Wilson told the stories of two men – Luis and Lawrence – who both died of AIDS due to the challenges they faced in being able to access testing and treatment for their disease.

“The AIDS epidemic is definitely a tale of two cities,” Wilson said. He also cited statistics showing where the fight against HIV/AIDS has failed: in getting people tested, as almost 20 percent of HIV-positive people are thought to be unaware of their status; and in moving HIV-positive patients from testing and into treatment, preferably with antiretrovirals. As the epidemic stands, less than a third of HIV-positive individuals are able to regularly adhere to antiretroviral therapy and achieve full viral suppression.

Wilson also called upon AIDS activists and patient advocates to defend the Obama administration’s signature health care law, the Affordable Care Act, due to its provisions that allow people with HIV and other pre-existing conditions to obtain health insurance that will provide them access to care.

“For people with HIV, these provisions are lifesaving,” Wilson said.

In addition to pushing for full implementation of the health care law, Wilson also provided the delegates with a checklist of four other actions. First, he said, HIV-positive people must come out in order to inform HIV-negative people of how important funding and research are, and in order to reduce stigma that often prevents people from getting tested or seeking medical help when infected.

Wilson also called for HIV/AIDS activists to demand treatment for all those who need it, as well as calling for health providers to integrate biomedical interventions with behavioral preventative methods, and stress the importance of a combined approach to their patients. Lastly, he said, AIDS organizations must retool their strategies in order to find more innovative ways to engage people in knowing their serostatus and pursuing treatment if they test positive. He stressed that information and education, of at-risk people, patients and providers, was essential to combating the epidemic.

“We’re going to squeeze out every drop of information we can,” he said. “Together, we are greater than AIDS.”

John Riley is the local news reporter for Metro Weekly. He can be reached at jriley@metroweekly.com
← Previous Story Dozens of locals counter the tiny AIDS 2012 Westboro Baptist appearance [video]
Next Story → Turning the Tide in the District