With less than two weeks until the kickoff of the XIX International AIDS Conference (AIDS 2012) in Washington, one key participating organization is expressing dismay at the failure of President Obama to confirm his attendance for an event being held a mile from the White House. 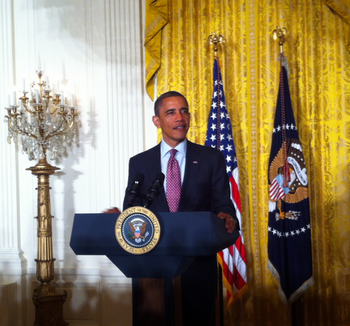 At a press conference this morning, members of the AIDS Healthcare Foundation (AHF) said Obama’s inaction was another example of an administration that has not placed the fight against AIDS high on its list of priorities.

“The president’s failure at this late date to commit to attending speaks volumes about this administration’s commitment to the AIDS epidemic,” said Tom Myers, chief of public affairs and general counsel for AHF, adding that Obama’s commitment has been “lukewarm at best.”

Organizers warn that if Obama fails to show it could send a poor message to the thousands of leading scientists and researchers expected to attend AIDS 2012 about American commitment to the global AIDS fight.

The conference is being held in the United States for the first time in more than two decades and will draw about 25,000 people to D.C.’s Walter E. Washington Convention Center, including former Presidents Bill Clinton and George W. Bush.

This is not the first time Obama has sent mixed signals to AIDS activists. Although Obama lifted the travel ban that prevented those with the disease from entering the U.S. in 2009 – an effort begun by his predecessor, George W. Bush – his global AIDS budget for fiscal year 2013 cuts funding by $214 million, decreasing it from $6.63 billion to $6.42 billion.

According to the AHF, no president has ever sought to reduce America’s commitment to fighting AIDS globally. Such a reduction represents 640,000 people who could otherwise receive lifesaving treatment. Moreover, AHF points to 2,000 low-income Americans who remain on AIDS Drug Assistance Program (ADAP) waiting lists in nine states.

“Frankly, it might be better if President Obama does not address the AIDS Conference if he plans on coming empty-handed,” Myers said, adding that the organization hopes Obama will use his power as president to transfer funds to end ADAP waiting lists and restore funding to this year’s levels for the President’s Emergency Plan for AIDS Relief (PEPFAR).

“Defunding PEPFAR and ignoring ADAP waiting lists merely confirms what people with HIV/AIDS and their advocates have long suspected — that the president is not seriously committed to fighting AIDS,” said AHF President Michael Weinstein.

Organizers also hope Republican presidential candidate Mitt Romney will use the conference as an opportunity to issue an AIDS policy statement as well, which his campaign has not yet done.

Myers pointed out that PEPFAR was created under the Bush administration and funding increased from $15 billion to $48 billion in five years.