According to a press release from Washington United for Marriage, $2.5 million dollars has been donated toward the fight for marriage equality by the head of Amazon.com, Jeff Bezos, and his wife MacKenzie. 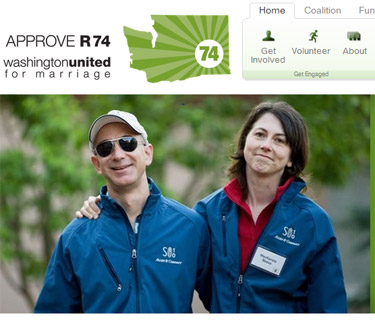 WUM’s Jennifer Cast is said to have held “senior positions” at Amazon, and the release quotes her as saying:

“I am thrilled by Jeff and MacKenzie’s staggeringly generous donation…. Their support of our efforts to approve R74 comes at an important time and will have great impact.  I am deeply grateful to both of them as this donation is going to help us make history.”

Washington’s Governor, Chris Gregoire had signed a marriage bill  in February. A same-sex marriage law was set to take effect on June 7, 2012, but a referendum was requested which put the measure on hold. Gay marriage foes successfully collected enough signatures to qualify the referendum for the November ballot.

Gay marriage supporters want voters to approve the measure, R74, which is set to read:

Ballot Title
The legislature passed Engrossed Substitute Senate Bill 6239 concerning marriage for same-sex couples, modified domestic-partnership law, and religious freedom, and voters have filed a sufficient referendum petition on this bill.This bill would allow same-sex couples to marry, preserve domestic partnerships only for seniors, and preserve the right of clergy or religious organizations to refuse to perform, recognize, or accommodate any marriage ceremony. Should this bill be:

Rejected [ ]Ballot Measure SummaryThis bill allows same-sex couples to marry, applies marriage laws without regard to gender, and specifies that laws using gender-specific terms like husband and wife include same-sex spouses. After 2014, existing domestic partnerships are converted to marriages, except for seniors. It preserves the right of clergy or religious organizations to refuse to perform or recognize any marriage or accommodate wedding ceremonies. The bill does not affect licensing of religious organizations providing adoption, foster-care, or child-placement.

Starbucks, Microsoft and other corporations have previously shown their support for marriage equality for Washington’s lesbian and gay couples, as well.