The Defense of Marriage Act has once again been challenged in court after an immigrant from the Philippines filed a class action lawsuit July 12 against the federal law, seeking to avoid deportation from the United States because of her marriage to an American woman. 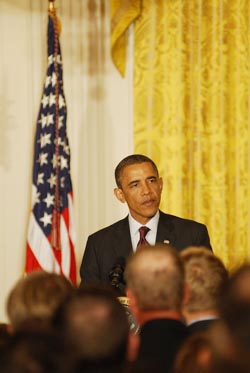 According to Reuters, Jane DeLeon, her son Martin Aranas, 25, and DeLeon’s wife, Irma Rodriguez, have challenged DOMA in an attempt to win same-sex couples the same immigration rights enjoyed by straight couples.

DeLeon, who married Rodriguez in California in 2008 and has been in a relationship with her since 1992, is facing deportation after her immigration visa was denied. Although she has tried to secure a waiver to indicate separation from Rodriguez would cause undue hardship, she has been unable to do so. Her lawyer argues that such waivers are often easy to obtain, but because the federal government does not recognize same-sex marriages her requests have been denied.

DeLeon’s son, who came to the U.S. when he was 9 years old, also faces deportation because his residency depends on his mother’s residency.

“After many years of having temporary legal status, I now face being in ‘illegal’ status only because my mother is in a same sex marriage,” Aranas said in a statement.

Although the Obama administration declared the 1996 law defining marriage as between a man and a woman unconstitutional in February 2011, DeLeon’s lawsuit accuses the administration of not placing all immigration cases involving same-sex couples on hold while DOMA moves through the courts.

Moreover, the lawsuit comes on the heels of Obama’s decision last month to halt deportations of many immigrants who came to the U.S. illegally as children.

Attorney for the plaintiffs and president of the Center for Human Rights and Constitutional Law, Peter Schey, said in a statement that he hopes the lawsuit will force the Obama administration to “grant an across-the-board stay of deportation and work permits to immigrants who qualify for visas but for the fact they are in a same sex marriage.”

This is not the first time DOMA has been challenged on the grounds of immigration protections, but Schey told Reuters this is the first class-action lawsuit brought against the law.