This past weekend the boards of directors of Servicemembers Legal Defense Network and OutServe voted to become one organization by October, SLDN announced this morning. 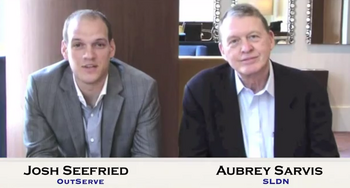 The move comes more than nine months after the end of “Don’t Ask, Don’t Tell” and more than six months after SLDN’s executive director, Aubrey Sarvis, announced his plan to leave his position once a new director was hired.

The resulting organization will have a new name and the new board will be led by one leader from each group. According to today’s news release, the coming months until October will be spent “unifying” the groups on administrative, financial and programatic fronts.

SLDN Board of Directors Co-Chair Mike Magee said in the statement, “SLDN has enjoyed a close working relationship with OutServe and its leaders from the beginning. Indeed, their voices, though anonymous at the time, were an integral part of the fight to repeal the discriminatory ‘Don’t Ask, Don’t Tell’ law. Since repeal, we’ve worked even more closely together and in doing so, it has become more and more clear that our shared mission — representing actively serving military and veterans, as well as fighting to achieve full LGBT equality in the military — is better accomplished by uniting the two organizations and working together as one on behalf of the brave men and women of our armed forces.”

Josh Seefried, co-founder and co-director of OutServe, said in the statement, “This comes down to mission first, just as it always is in the military. Both of these organizations recognize that they are stronger and more effective together. It is a great day for both organizations and for the LGBT service members and veterans around the world, who need a strong, unified voice speaking for them at the White House, on Capitol Hill, at the Pentagon, and among the American people.

“What began as a simple effort to tell our stories has grown into something we could never have imagined, and today’s announcement that OutServe and SLDN will combine represents the next step in that evolution. Each organization brings its own strengths to the fight for full LGBT military equality, and we are stronger together.”

Although DADT has been repealed, issues of spousal benefits, nondiscrimination within the military and transgender service — among other issues — remain on advocates’ agendas.

The heads of the two groups, Sarvis and Seefried, put together a video announcing the decision as well.