By Troy Petenbrink on August 2, 2012 @thegaytraveler 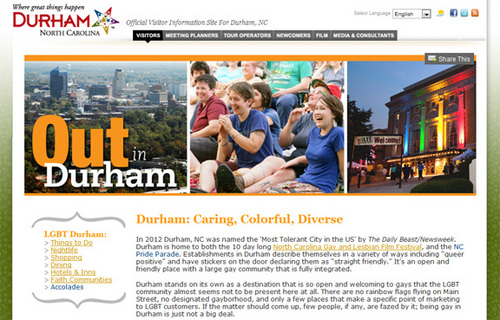 In May, North Carolina approved a constitutional amendment banning same-sex marriage.  On Tuesday, one of the state’s most progressive cities announced a new campaign to encourage gays and lesbians to visit.

A majority of Durham’s residents voting against the state’s gay marriage ban, and it was ranked as the nation’s most tolerant city last year by The Daily Beast/Newsweek magazine.

“Research has shown that Durham has a significant number of visitors who identify themselves as LGBT,” said Shelly Green, president & CEO of the DCVB. “Having this kind of portal into our [main] website has been in the plans for quite some time,” continued Green, “And we are pleased to launch it now.”

The new site was launched in advance of the upcoming NC Gay and Lesbian Film Festival to be held at Durham’s Carolina Theatre. Running from August 10 to 19, the festival is expected to attract more than 10,000 visitors.

“It is more clear than ever that we need to talk about the LGBT market differently in Durham,” said Sam Poley, the Director of Marketing and Communications for DCVB. “The community is so large and well entrenched here that it often goes overlooked. But after the Amendment One vote, we think it is ever more important to let folks know that Durham is where great things happen – for everyone. The [NC Gay and Lesbian Film Festival] is a wonderful way for us to illustrate that, and we’re proud to do so,” he added.

LGBT visitors to OutinDurham.com will find a useful overview of the city’s attractions, nightlife, shopping, dining, accomodations and faith communities.