Sony brought their A-game to IFA. They also brought their B-game, and C. Their D, too. In fact, they pretty much brought an entire alphabet of game, so stocked was the Sony press conference with announcements, covering almost every major tech consumable category. We have new smartphones joining the Xperia line-up, a replacement for last year’s Tablet S, Windows 8 hardware, a spanking new 4K Bravia TV, projectors, cameras, 3D headsets… Basically, they brought a lot. Not that we at Technocrat are complaining. Sony has essentially brought an entire brewery of alcohol to a BYOB house party, and that’s alright with us. For the low-down on some of the most exciting announcements, read on…

Sony announced three new smartphones to join the already rather crowded — but very appealing — Xperia line-up of handsets, with the Xperia T, V, and J making their debut.

The T — or TX as it will be known in some regions — is the new top dog in Sony’s line-up, sporting a 4.6-inch 1280×720 Mobile Bravia Engine-powered display, dual-core 1.5GHz Qualcomm processor, a 13-megapixel camera (8 megapixels are very last year), NFC capability and, naturally, Playstation certification for Sony’s Android PlayStation games.

The V is a curious mid-ranger, whose stand-out feature is iPx5/7 water resistance. So, drop it in a puddle and it’ll keep on truckin’. Throw it in a pool and we’ll ask what you were thinking, but it should still fair well down to a metre. The V comes with a 4.3-inch 1280×720 display, the same 1.5 GHz dual-core as its big brother, the same 13MP camera, and PlayStation certification.

The smallest of the three is the new J. Aimed at budget-conscience but style-aware buyers, it makes do with a 4-inch display, a singe-core 1GHz processor, and a very 2009 5MP camera. However, it’s a slender 9.2mm thick, and comes in black, gold, white and pink, so matching it to your equally fashion-conscience but budget-aware outfit should be a cinch.

All four launch with Android 4.0.4 Ice Cream Sandwich, with the T and V slated for some delicious Jelly Bean action at a later date. The T launches in the next month, with the V and J before the end of the year.

Last year’s Tablet S was a curious device. Launched alongside the Tablet P, it was the more conventional of the two, but sported Sony’s unique magazine-style folded chassis, designed to ape the feeling of holding — oddly enough — a folded magazine. It was a great design, but the humdrum specs and plastic build ensured it never reached the stature of the ASUS Transformer Prime or Apple’s iPad. Enter, then, the new Tablet S. Only this time, it bears Sony’s Xperia branding, tying it in with its smartphone cousins. In terms of specs, it’s sadly more of last year’s humdrum, albeit updated slightly for 2012. Power comes courtesy of a Tegra 3 quad-core CPU, there’s 16, 32 and 64GB of storage available, and a decidedly old-school 1280×800 IPS display stretched across 9.4-inches of screen. A 6000mAh battery will keep things going for up to 10 hours, and the Tablet thankfully keeps last year’s IR emitter, allowing the Xperia Tablet S to double as a universal remote.

One part that didn’t carry over from the Tablet S was the plastic build, with Sony opting for a metal case, which it has also slimmed down and put on a diet (criticisms of the Tablet S have clearly been taken to heart). If, however, this all seems a bit banal in the face of Full HD, quad-core tablets from ASUS and Acer, Sony has tried to lessen the blow with its app selection. Watch Now enables live-TV viewing with a cable subscription; Guest Mode allows the creation of custom profiles so friends can play with your tablet but not access certain apps (no more Fraping or Twaping for Tablet S users); and Sony’s Music and Video Unlimited services provides access to the vast vaults of Sony-owned content (for a price). The Xperia Tablet S launches September 7, with prices starting at $400 for the 16GB model.

Undoubtedly the more interesting of Sony’s tablets is the newly unveiled VAIO Duo 11, Sony’s first touchscreen model for the upcoming Windows 8. It’s a hybrid PC, with the 11.6-inch, 1080p touchscreen sliding back to reveal a full QWERTY keyboard. That sliding screen features a digitizer, a boon for artists and fervent note-takers, as it allows for the use of a stylus. Inside, the Duo 11 matches the best of the Ultrabook crowd, with Core i3, i5 and i7 CPUs, 128 or 256GB SSDs, wireless NFC, GPS, and front and rear HD cameras. Full details are thin on the ground, but the Duo 11 is expected to launch on or near the October 26 release of Windows 8, with pricing still to be announced. It won’t be cheap, but it will likely match the upper-end of the Ultrabook market. 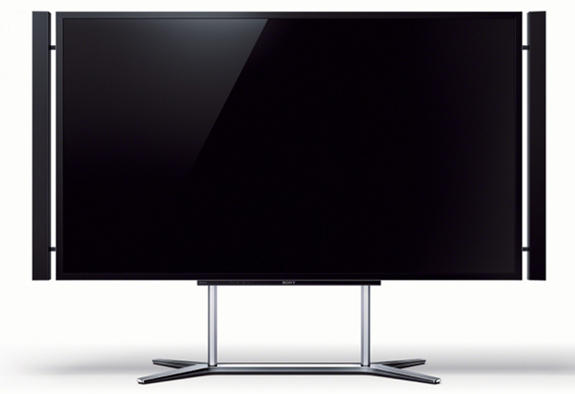 Sony is jumping on the 4K bandwagon, with the announcement of their new Bravia KD-84X9005. In layman’s terms? An 84-inch LCD TV pumping out content at 3840×2160 resolution. The gorgeous set includes Sony’s X-Reality Pro Engine to ensure perfect picture quality, as well as a 10 Unit Live Speaker system for your audio needs. It’s also 3D-enabled, and will automatically upscale 3D content, which at this resolution means Full-HD images to both eyes — as opposed to current 1080p 3D TVs which deliver a 540p image to each eye and combine to make a Full-HD image. There’s no pricing, yet, but Sony promise more information at next week’s CEDIA. Availability is Q4 this year.

Sony has also broken out its new VPL-HW50ES projector. The catchily-named hardware fails to match the 4K resolution of company’s new TV, but is capable of 1080p video, is 3D-ready, and has a dynamic contrast ratio of 100,000:1, with a brightness rated at 1700 lumens, to further the at-home cinema experience. Sony is touting reduced crosstalk in images, a wider lens shift and a maximum noise output of just 21db while in operation, enough for the company to declare that they are “confident that [they’ve] raised that bar again, setting the benchmark for home cinema projection.” Lofty claims indeed, and you’re welcome to see for yourself when it’s available this October, albeit only in Europe for the interim.

It’s not strictly home video, but Sony quietly announced their new HMZ-T2 Personal 3D viewer. Yes, you read that correctly, a personal 3D viewer. The headset is a wearable 3D display, giving users a pair of 0.7-inch 3D capable displays utlizing OLED technology to create a Retina-shaming 1280×720 resolution across 1.4 combined inches of screen. Sony’s Virtualphones system is present to virtualize a 5.1 surround sound system, albeit one that sits comfortably on your face — aided by the unit’s light 330g footprint. Pricing and availability are as yet unannounced, but don’t expect it to be cheap. Do expect it to be awesome, though, and likely available in time for the holidays. 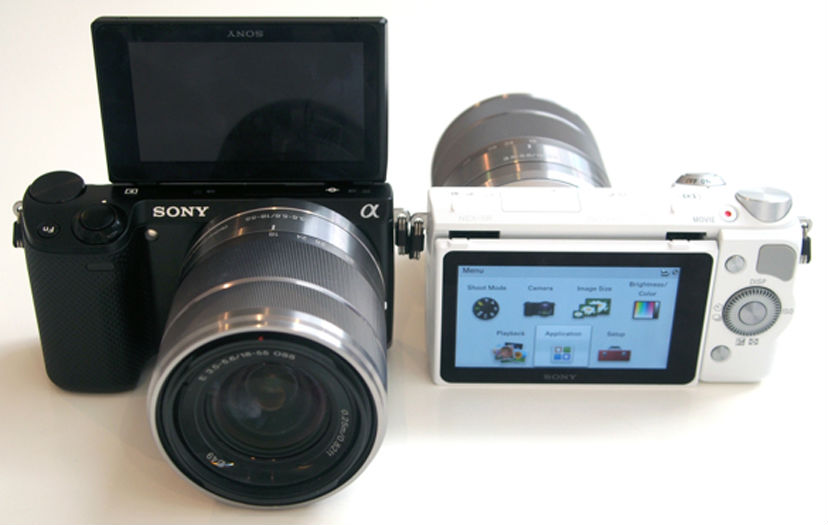 Photography aficionados here’s your section, as Sony has announced its new NEX-5R camera.

The NEX-5R is Sony’s new mid-range compact, featuring a Sony-developed 16.1 megapixel Exmor APS HD CMOS sensor, which is identical in size to those found in conventional DSLRs. Low-light sensitivity is touted as ISO 25,600, and the 5R features Sony’s Fast Hybrid AF autofocus technology, which combines phase-detection and contrast-detection to “ensure speedy, accurate autofocus in any shooting situation.”

In a first for a Sony mirror-less camera, the 5R also features WiFi — the go-to tech for cameras at the moment — and introduces Camera Apps, which are designed to enable different shooting modes and styles to further content creation. They will also allow for on-device editing and retouching, with apps being developed to give photographers greater personalization of their photos. Video comes in 1080/60p, and the camera boasts 10fps continuous shooting with autofocus tracking. A front-facing LCD for self-portraits is included for all your profile picture needs, and Sony’s PlayMemories app is included for wireless back-up to a networked PC. DLNA is also included, gifting further options to share your holiday snaps with family, or show your friends that really cool flower you had to get a black and white macro snap of. The 5R will launch this October in silver, black and white for $750 with an 18-55mm lens. Body only will set you back $650.