News Analysis: A marriage-equality plank in the Democratic platform would be a first, but possibly little more

”Like Americans from all walks of life, the Democratic Party has recognized that committed and loving gay and lesbian couples deserve the right to have their relationships respected as equal under the law,” Human Rights Campaign President Chad Griffin said in a statement. 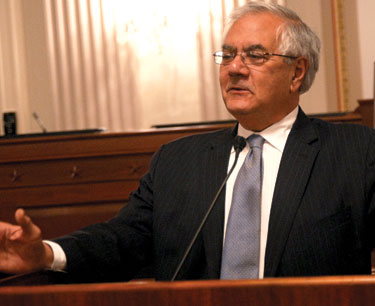 National campaign director of Freedom to Marry, Marc Solomon, also praised the move, lauding the Democratic Party’s ”noble history of fighting for the human and civil rights of all Americans.”

The news was historic, although not entirely unexpected. After all, the Democratic Party had all but endorsed marriage equality, having long worked to support LGBT rights and opposing laws – such as the Defense of Marriage Act – that disenfranchise the gay community.

There had also been numerous hints that the party might adopt marriage equality, including when the chair of the Democratic National Committee, Rep. Debbie Wasserman Schultz (D-Fla.), told the Philadelphia Gay News she expected marriage equality to be a plank in the national party platform.

Nevertheless, the news was no less headline worthy. But in the week since, questions have emerged as to what, exactly, the broader impact of a party platform will be on American politics.

In a heated exchange with Chris Matthews on MSNBC’s Hardball, out Rep. Barney Frank (D-Mass.), who sits on the committee responsible for drafting the party platform, said he was puzzled by the attention the platform had received.

”A platform is supposed to tell the officials how they should vote,” said Frank. ”We’ve already voted.” In July, 132 House Democrats filed a brief detailing their opposition to the Defense of Marriage Act.

His voice echoing in the rotunda of the Capitol, the 72-year-old Frank, who married his partner in July and will retire from Congress later this year, said President Barack Obama’s endorsement of marriage equality and a split between the Democratic and Republican parties on the issue, had made the platform a nonissue.

What appeared to bother Frank the most was talk of a federal campaign for marriage equality.

”There is a fundamental confusion here,” Frank said. ”There has never been a federal law saying what marriage is.”

As Frank noted, a party platform is intended to instruct party members how they should vote on certain issues. Moreover, the Democratic Party had all but endorsed marriage equality in the past.