By John Riley on September 28, 2012 @JohnAndresRiley

A day before the Sept. 25 criminal hearing for gay rights – and environmental – activist Lt. Dan Choi, accused of failing to obey an officer’s order and of unlawful assembly and disorderly conduct during a 2011 Keystone XL pipeline protest, the judge in the case recused herself. 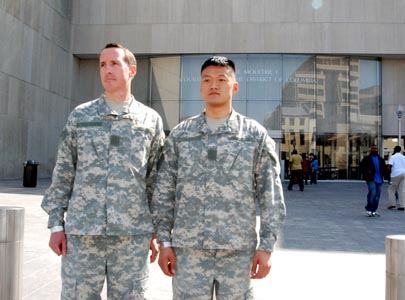 Magistrate Judge Elizabeth Wingo recused herself due to a motion made by Choi’s lawyer, Capt. James Pietrangelo II, regarding government misconduct. Metro Weekly was not able to confirm the exact reason for Wingo’s recusal.

As part of Choi’s defense, Pietrangelo has subpoenaed more than 30 government officials, including former White House Press Secretary Robert Gibbs and former White House Deputy Chief of Staff Jim Messina, to testify about their political roles in two separate protests outside the White House – one, in 2010, related to the repeal of the military’s “Don’t Ask, Don’t Tell” (DADT) policy, and another in 2011 regarding the Keystone XL pipeline.

Both times, Choi was arrested and charged with failing to obey an order given by a law enforcement officer. But unlike in the Keystone XL protest, where Choi and others were charged in D.C. Superior Court, Choi was charged with failing to obey an order in federal District Court after he refused to move from the ledge of the White House fence during the 2010 DADT protest.

Choi, one of 14,000 servicemembers forced out of the military under the now defunct DADT policy, has maintained that the Obama administration has tried to silence him because he has been critical of the president. In the course of Choi’s trial related to his arrest at the DADT protest, Choi and his former lawyers Robert Feldman and Norman Kent argued that the government engaged in selective or vindictive prosecution of Choi when it charged him in federal court, rather than D.C. Superior Court – as was the case with other DADT protesters, and was the case when Choi was arrested during the Keystone XL protest.

Following Wingo’s recusal in the Keystone XL case, Choi’s Sept. 25 hearing was vacated and canceled, prompting Pietrangelo to remark, “There is something very wrong here. We subpoenaed White House officials, and all of a sudden the hearing is canceled.”

The case was later handed over to D.C. Superior Court Judge Juliet McKenna. Appearing in court Sept. 26, Pietrangelo filed an emergency motion to continue subpoenas against the government officials. At the hearing, McKenna scheduled both a subsequent motion hearing and trial for Nov. 5. In the meantime, McKenna will review the facts of the Keystone case and allow Pietrangelo to submit motions to aid his client.

In addition to the Keystone XL case, Choi’s trial for the DADT protest has not yet been resolved. He has been scheduled to appear in U.S. District Court for that case on Oct. 17.

That trial, stemming from the DADT protest – as well as Choi’s defense strategy – was halted after Chief Judge Royce C. Lamberth, U.S. District Judge for the District of Columbia, issued a writ of mandamus ordering presiding U.S. Magistrate Judge John Facciola not to allow Choi’s lawyers to argue “vindictive prosecution” as a defense, or the idea that the government singled out Choi for prosecution because it did not like his criticism of the Obama administration and its slowness on repealing DADT.

This means that, when trial resumes, Facciola or another presiding judge cannot take into account whether prosecutors were treating Choi differently because he was openly gay and protesting DADT at the time of his arrest.

John Riley is the local news reporter for Metro Weekly. He can be reached at jriley@metroweekly.com
← Previous Story New Poll Shows Maryland’s Question 6 Winning, Fueled by Boost from African-Americans and Independents
Next Story → DOMA Challenge Goes to Federal Appeals Court in New York