Facing a passionate and at times boisterous crowd of District residents and activists Sept. 9, seven incumbent D.C. City Council members were grilled over their records and positions on a variety of issues, including economic development, corporate influence in local elections, home foreclosures, gentrification, hate crimes and the ability of businesses to obtain liquor licenses.

Seated onstage at Busboys and Poets in the U Street corridor Sunday evening as part of a ”DC Public Forum,” the brainchild of local gay activist Nick McCoy, the councilmembers answered questions from McCoy, audience members and representatives from organizations co-sponsoring the event, such as the Washington Informer, WPFW 89.3 FM, the Washington Blade and DC Mic Check. McCoy said the intent of the forum was to inform residents of what the incumbent councilmembers have done, their records, and give them a chance to justify why District residents should re-elect them. 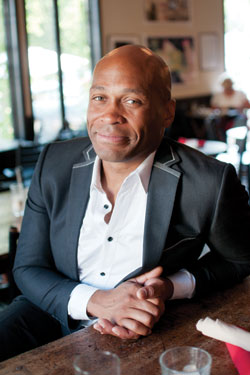 Washington’s two gay councilmembers, David Catania (I-At Large) and Jim Graham (D-Ward 1), were not invited to speak, with organizers giving priority to those councilmembers on the November ballot.

Although organizers said they also invited Mayor Vincent Gray (D) to attend and justify his work on behalf of District residents, the forum essentially served as a preview of the 2014 mayoral race as most of the panelists, except for Alexander, have been rumored to be interested in running for higher office.

When McCoy asked the panelists if they had ever made a mistake on a vote and, if so, how they corrected it, most said they had ”struggled” with particular votes but did not admit to making mistakes. Mendelson responded he had made mistakes, but wouldn’t admit what they were.

But Mendelson expanded on his answer, explaining that taking unpopular stances on various issues was a mark of leadership that is required of political officeholders. Referencing Barry, a former four-term mayor and longtime councilmember, but not by name, Mendelson used the example of marriage equality as something that was in the best interest of the District, but may not have been popular among certain constituencies. When marriage equality passed the Council in 2009, Alexander and Barry were the only two who opposed the measure.

”When we had marriage equality before us in the Council, we voted 11-2 in favor of marriage equality,” Mendelson said. ”I was proud of my position on that, and what the Council did. But there were a couple of members who voted no. And at least one of them voted no, saying that’s where his constituency was. I didn’t think that was a leadership position. I think a leadership position was to disagree, and to do what was in the best interests of the city.”

Blade reporter Lou Chibbaro Jr. asked the panelists what could be done to prevent hate crimes against the LGBT community and whether they would be willing to go into schools and speak out against anti-LGBT violence, since many recent crimes with an anti-LGBT bias have been committed by youths in their teens or early 20s. All the panelists said they would be willing to do so, and many mentioned the recently passed anti-bullying legislation that is intended to protect students from bullying in schools, at school-related functions and in the District’s libraries and recreation centers.

”We can do a lot more with our schools, with our young people, to really show that we’re a culture and we’re a place that doesn’t just embrace diversity, but protects diversity,” Wells said.

”Hate and bullying come from lack of education, or a lack of understanding of people who are different from them,” Michael Brown said. ”Until young folks understand that there are other folks who aren’t like them, who listen to different music – and it’s okay – we’re going have these particular kind of incidents.”

Brown also linked anti-LGBT violence to gentrification, telling the audience that as long as the economy isn’t growing fast enough and longtime residents feel they are being forced out of the District, ”we have a lot of angry people out there, and when we have angry people, that’s when conflict can occur.”