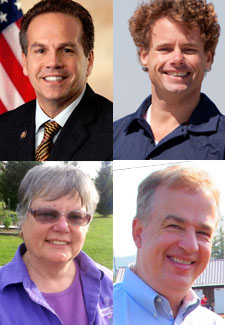 While a success for the LGBT community, the primary wins were also another victory for the increasingly powerful Victory Fund, which works to elect LGBT public officials through increased strategic, technical and financial support. All four winning candidates on Tuesday were endorsed by Victory Fund.

Out gay Rep. David Cicilline secured the nomination of his party for another term in his first bid for reelection to Congress. The Rhode Island Democrat is one of only four out gay members of Congress and was first elected in 2010.

Cicilline overwhelming defeated Anthony Gemma in the Democratic Party for Rhode Island’s 1st congressional district with 62 percent of the vote. Gemma was also one of Cicilline’s opponents in 2010.

“Now voters will face a clear choice this November between a persistent champion for LGBT equality, and an opponent who supports the Defense of Marriage Act, which makes life harder for so many American families,” Wolfe said.

Although Cicilline’s renomination appeared a given, he has faced increased criticism during his first term after the city of Providence, which he oversaw as mayor before being elected to Congress, discovered a $110 million budget shortfall. As mayor, Cicilline painted an optimistic picture of the city’s financial situation.

Nevertheless, Cicilline is polling ahead Doherty 49 to 43 percent, according to a poll provided to The Hill.

On the local level in Delaware, two LGBT candidates also secured the nominations of their party and took another step closer to becoming Delaware’s first first out LGBT legislators.

Also claiming victory was Marie Mayor, who spent much of her career as an educator in the Baltimore area. Mayor is running for a seat in the Delaware House of Representatives.

According to Wolfe, their victories signal an “important step toward achieving full equality.”

In New Hampshire, state Rep. David Pierce successfully won his Democratic primary for the state Senate as well. Serving his third terms in the New Hampshire House of Representatives, Pierce was a key advocate for marriage equality in 2009 when the state legalize same-sex marriage.

Tiffany Muller, vice president of political operations at Victory Fund, said Pierce’s win is part of a larger effort across the country to send at least one LGBT lawmaker to every state house in America.

Says Muller, “We’re working to make sure every state legislative chamber has at least one openly LGBT voice–someone who can speak authentically about our lives when it matters most.”