By Justin Snow on September 7, 2012 @JustinCSnow

With a speech that was both a call to arms to the Democratic base and a direct response to Republican critics, President Barack Obama brought the Democratic National Convention to a close on Thursday night.

As he formally accepted the nomination of his party for a second term, Obama asked voters not to cave into cynics who claim the hope and change of the 2008 campaign was simply empty rhetoric. 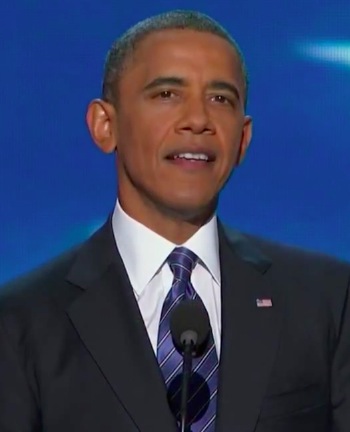 “If you turn away now — if you buy into the cynicism that the change we fought for isn’t possible, well, change will not happen,” Obama told the packed Time Warner Cable Arena in Charlotte, N.C. “Only you have the power to move us forward.”

“Forward” has been a theme throughout Obama’s reelection campaign as he tries to convince voters one term alone is not enough time to accomplish the change he promised in 2008.

“If you give up on the idea that your voice can make a difference, then other voices will fill the void,” Obama warned, including the voices of “Washington politicians who want to decide who you can marry.”

Speaking to Republican critics who believe government is always the problem, Obama said government isn’t the source of all our problems “any more than are welfare recipients, or corporations, or unions, or immigrants, or gays, or any other group we’re told to blame for our troubles.”

Ticking off a list of accomplishments, the president highlighted his repeal of “Don’t Ask, Don’t Tell” as well.

“You’re the reason a young immigrant who grew up here and went to school here and pledged allegiance to our flag will no longer be deported from the only country she’s ever called home; why selfless soldiers won’t be kicked out of the military because of who they are or who they love; why thousands of families have finally been able to say to the loved ones who served us so bravely: ‘Welcome home.'”

Democrats put much emphasis on the military throughout the three day convention in an apparent attempt to contrast Mitt Romney who failed to mention Afghanistan in his convention speech, becoming the first GOP nominee since 1952 not to mention war in his acceptance speech.

In many ways, Obama’s speech was far more restrained than the soaring rhetoric that catapulted him to the presidency four years ago, a fact that Obama seemed to acknowledge himself during his speech.

While Obama may have attempted to quell some of the high expectations that have left some disappointed in his presidency, his speech left delegates on their feet and some in tears.

“Show us anew that happiness is found only in respecting the laws of nature and of nature’s God,” Dolan said. “Empower us with your grace, so that we might resist the temptation to replace the moral law with idols of our own making, or to remake those institutions you have given us for the nurturing of life and community.”

Dolan, who also delivered the benediction at the Republican National Convention last week, opposes marriage equality. After Obama announced his support for marriage equality in May, Dolan said he would continue to pray that Obama “act justly to uphold and protect marriage as the union of one man and one woman.”

Nevertheless, Obama’s speech and its multiple nods to LGBT voters were the culmination of what many perceive as the most gay-friendly political convention by a major party in American history.