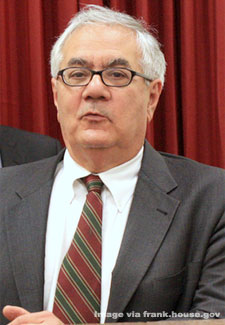 Less than a week after he equated Log Cabin Republicans to “Uncle Toms,” out gay Rep. Barney Frank reaffirmed his comments in a statement released on Tuesday.

The Massachusetts Democrat elaborated on his reasoning for equating the group of gay Republicans to the slave character from Harriet Beecher Stowe’s 1852 novel, Uncle Tom’s Cabin.

According to Frank, he is not surprised members of LCR are offended by his comments, but he said “they are no more offended than I am by their campaigning in the name of LGBT rights to elect the candidate and party who diametrically oppose our rights against a President who has forcefully and effectively supported our rights.”

In an email to Metro Weekly, LCR executive director R. Clarke Cooper said equality can only be achieved through bipartisanship:

“Congressman Frank, of all people, should understand the importance of perseverance when working within a party to achieve change – after all, it was not so long ago his party was indifferent at best when it came to respecting gay families. Leaders committed to LGBT equality know that every victory our community has achieved has required bipartisan advocacy and bipartisan votes, and winning support from Republicans will only be more important in the days ahead. Come January, Republicans will maintain a majority in the House and likely secure a majority in the Senate. Without Log Cabin Republicans working with fellow conservatives, LGBT Americans would be left without a credible voice within the GOP. Barney Frank’s denial of Log Cabin Republicans success, particularly on ‘Don’t Ask, Don’t Tell’ repeal and the freedom to marry in New York, is sad but unsurprising. It is time for him to pass on the baton to leaders better suited to a world where equality is not a partisan issue.”

Frank also pulled GOProud into his fight with LCR, describing the group of gay conservatives as “oddly named” and LCR’s “even more outlandish cousins.”

GOProud executive director Jimmy LaSalvia was direct in his response to Frank’s statement, declaring, “I don’t give two shits what that asshole thinks about GOProud.”

“We don’t represent him. We represent gay conservatives and our allies. I’ll just be glad to see him out of office because his policies have hurt our country,” LaSalvia told Metro Weekly, describing Frank as an “embarrassment to the gay community.”

I am not surprised that members of the Log Cabin Republicans are offended by my comparing them to Uncle Tom. They are no more offended than I am by their campaigning in the name of LGBT rights to elect the candidate and party who diametrically oppose our rights against a President who has forcefully and effectively supported our rights.

That is the first reason for my admittedly very harsh criticism. This election is clearly one in which there is an extremely stark contrast between the two parties on LGBT rights. The Democratic President and platform fully embrace all of the legal issues we are seeking to resolve in favor of equality. The Republican candidate for President and the platform on which he runs vehemently oppose us in all cases. On the face of this, for a group of largely LGBT people to work for our strong opponent against our greatest ally is a betrayal of any supposed commitment to our legal equality.

But my use of “Uncle Tom” was based not simply on this awful fact that they have chosen to be actively on the wrong side of an election that will have an enormous impact on our right to equality, both in fact and in the public perception of the popularity of that cause. If the Log Cabin Republicans – or their even more outlandish cousins, the oddly-named GOProud –were honestly to acknowledge that they let their own economic interests, or their opposition to strong environmental policies, or their belief that we need to be spending far more on the military or some other reason ahead of any commitment to LGBT equality, and on that ground have decided to prefer the anti-LGBT candidate to the supportive one, I would disagree with the values expressed, but would have no complaint about their logic.

The damaging aspect of the Log Cabin argument, to repeat the most important point, is that they may mislead people who do not share their view that tax cuts for the wealthy are more important than LGBT rights into thinking that they are somehow helping the latter by supporting Mitt Romney and his Rick Santorum platform.

It is a good thing for Republicans to try to influence other Republicans to be supportive of LGBT rights. The problem is when they pretend to be successful when they haven’t been, and urge people to join them in rewarding the Republicans when they have in fact continued their anti-LGBT stance. I have been hearing the Log Cabin Republicans proclaim for years that they were improving the view of that party towards our legal equality. In fact, over the past 20 years, things have gotten worse, not better. Most recently, on DOMA, when the House Republicans offered an amendment to reaffirm it, they voted 98% in favor of it, while Democrats voted more than 90% against the amendment. And it is not surprising that they have not been successful. Giving strong political support to people who are maintaining their anti-LGBT stance is hardly an effective strategy for getting them to change it.

The argument Mr. Cooper and the others in the Log Cabin Republicans have put forward in their defense is that they have succeeded in getting the Republicans to reduce the extent to which they denounce us, and, in Mr. Cooper’s phrase, the fact that Paul Ryan is “willing to engage” with gay Republicans. That is where Uncle Tom comes to mind. They are urging people to vote for the anti-LGBT candidate over the most supportive LGBT candidate and platform imaginable because the “antis” are calling us fewer names and are willing to talk to some of us. It is this willingness to acquiesce in a subordinate status as long as the masters are kinder in tone, although in substance, that emulates Uncle Tom.

I note Mr. Cooper points to a couple of Republicans as reasons for supporting that party and helping advance its anti-LGBT crusade. As to Representative Ryan, in addition to his “willingness to engage with them,” Mr. Cooper cites his vote for the Employment Nondiscrimination Act. In fact, Paul Ryan has an overwhelmingly anti-LGBT voting record, including opposition to the repeal of “Don’t Ask, Don’t Tell,” and a transgender-inclusive hate crimes bill, and support for a constitutional amendment not just to ban future same-sex marriages but to dissolve existing ones. It is true that on one occasion he voted for ENDA, but he did so only after voting minutes before for a Republican procedural maneuver – a motion to recommit the bill – which falsely invoked the specter that passage of ENDA would compel same-sex marriage and which, if it had passed, would have killed the bill. In other words, Paul Ryan has always voted against us, except for one occasion when he voted for us only after first trying to make the bill he theoretically supported inoperative.

Mr. Cooper also cites Susan Collins. She was very good on the question of “Don’t Ask, Don’t Tell.” But the argument that supporting Susan Collins advances LGBT rights ignores the fact that Senator Collins has twice defeated Democrats who were far more supportive of our issues than she was. And an example of that is the current referendum in the state of Maine on marriage. We have a very good chance of winning in Maine, and winning a referendum is important both for the substantive rights of the people in Maine and for the political point that it demonstrates. Unlike the two Democratic Representatives from Maine, Chellie Pingree and Mike Michaud, Susan Collins has been stubbornly silent. That is, in a state where marriage is on the ballot, and in a year in which she is not up for reelection, Senator Collins is withholding her support from us, unlike any Democrat who would have run against her. And remember, these are the best that the Log Cabin Republicans can cite.

Some have complained that in comparing the Log Cabin Republicans to Uncle Tom, I was ignoring the fact that they are nice. I accept the fact that many of them are nice – so was Uncle Tom – but in both cases, they’ve been nice to the wrong people.

Recent headlines in the Washington Blade make the point as clearly as I did. In the August 10th issue, a headline proclaims that the “Log Cabin seeks to purge anti-gay language from Republican [platform] document.” In the August 31st issue, another headline states that “Republicans affirm anti-gay views in platform, speeches.” In the September 7th issue, a third headline reports that “Democrats embrace marriage; hundreds of LGBT delegates take part.”