Garrison Starr should be a bigger deal than she is

To set the record straight, Garrison Starr is not the girl Katy Perry kissed and told about in song.

”No, no, it wasn’t,” Starr laughs. ”Believe me, I would be telling everybody that if I were.” 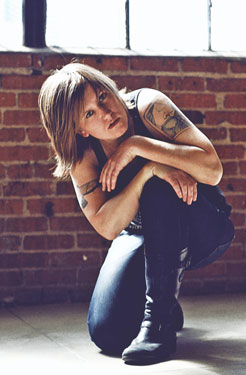 But Starr did hit on Perry several times years ago when the two, who had mutual friends and colleagues, performed shows together in Los Angeles. ”Looking back on it, it’s embarrassing,” Starr says. ”I always did it when I was drunk.”

The 37-year-old Starr, a native of Mississippi, has been a recording artist for 15 years, originally signed to Geffen Records. But one listen to her sweet voice and sophisticated songs, drawing clear influences from the Beatles, Indigo Girls or Shawn Colvin, and you’ll realize she should be a bigger deal than she is. ”Sometimes I do wonder why I haven’t found more of a mainstay place in the music industry,” she says. ”I haven’t really broken through in my career to a level that some of my peers have.”

Perhaps it’s something to do with her often complicated lyrics, as often as not conveying the pain of growing up in conservative Mississippi and coming out while a student at the University of Mississippi.

Out for a decade now, Starr lives in L.A. and concedes that she still struggles a bit to overcome the ”deep shame” she felt growing up gay. She’s still reflecting on it, too, such as on the single ”To Garrison on Her 29th Birthday” on her new fan-funded, self-released set Amateur, which also includes a duet with Mary Chapin Carpenter.

Starr is currently touring with fellow indie singer-songwriters Maia Sharp and Adrianne Gonzalez, offering concerts in which the three are onstage the whole time, each taking turns performing the others’ repertoires.

”It just elevates everybody’s music to another level, to be able to play these songs as an ensemble.” ‘