Almost a year after the repeal of “Don’t Ask, Don’t Tell,” a new study has found that the end of the discriminatory ban on out gay servicemembers has had no negative impact on the military. 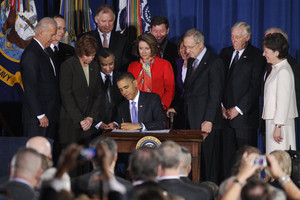 Published today by the Palm Center of the Williams Institute at the University of California Los Angeles, School of Law, it is the first academic study of the repeal of DADT and it shows that the repeal has not resulted in any consequences for military readiness, cohesion, recruitment, retention, assaults, harassment or morale.

The study comes almost a year after DADT was repealed Sept. 20, 2011, and four months after the Defense Department confirmed through their own report that repeal of DADT had not hurt the military. Originally enacted in 1993 under the Clinton administration, more than 13,000 gay men and women were discharged under the ban.

According to Aaron Belkin, in a release announcing the study, of which he was the lead author, “The U.S. Military has set an international standard with the smooth transition to openly gay service.”

Only two service members, both of whom were chaplains, have left the military as a result of the repeal. Moreover, the study states that both unit morale and readiness remain unfazed.

In the lead up to the repeal of DADT under President Barack Obama, opponents made bold statements that such a move would threaten the very foundation of the American military.

In March 2009, 1,167 retired generals and admirals signed a statement that claimed, among other things, repeal of DADT “would undermine recruiting and retention, impact leadership at all levels, have adverse effects on the willingness of parents who lend their sons and daughters to military service, and eventually break the All-Volunteer Force.”

Researchers began their study by contacting 553 of those 1,167 retired generals and admirals. Of those 553 contacted, 13 participated in the study. Researchers also conducted interviews with other opponents and dozens of active-duty servicemembers.

Although the study found previous claims that repeal of DADT would “break the All-Volunteer Force” to be unfounded, they did still find homophobia to be a problem for out servicemembers.

A Pentagon spokesperson told researchers that she was unaware of a single act of violence related to the repeal, but that incidents of anti-LGBT discrimination still persist. According to the study, 11 percent of respondents mentioned such incidents, including one in which an officer was told not to engage in public display of affection with the officer’s partner during a promotion ceremony.

Moreover, the report states that in an April, “a female officer was dancing with her girlfriend, another officer, at a military ball, when a squadron commander told the women to stop. The situation escalated and the Command Sergeant Major swore at the women, called them an ‘abomination,’ and shoved one across the floor.”

Despite those findings, the study found no service-wide patterns of harassment as a consequence of repeal. Some servicemembers also said it was now easier to resolve conflicts because they could speak more freely about cases of harassment.

According to the study, “greater openness and honesty resulting from repeal seem to have promoted increased understanding, respect and acceptance.”