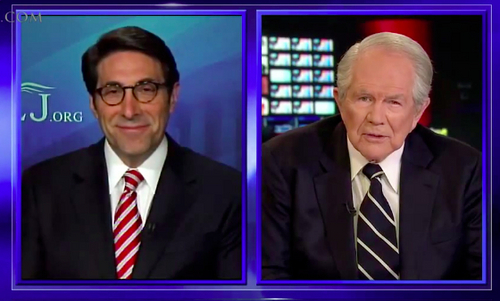 A conservative Christian legal group has fired one of its senior attorneys after reports surfaced on the Internet that he may have had romantic relationships with younger men.

The American Center for Law & Justice (ACLJ), founded by anti-gay televangelist Pat Robertson and led by Jay Sekulow (pictured above), confirmed in a statement provided to Metro Weekly that James Henderson, a senior counsel with the group who focused on federal civil rights and constitutional law, had been fired from the group Sept. 25, one day after a report surfaced on a blog that he may be gay.

“He is no longer affiliated with any ACLJ entity,” said Ronn Torossian of 5W Public Relations in an email to Metro Weekly. “ACLJ will not comment further on this personnel matter.”

ACLJ’s confirmation comes after two blogs — Exposed Politics and The Patriot-Ombudsman — published troves of information about Henderson and his relationship with two younger men. Henderson is married and has eight children.

Although there has been speculation as to the age of the two men, it is unclear if they were under the age of consent in the state of Virginia where Henderson lives.

According to the two bloggers, Henderson used a Facebook account to communicate with the two men. Conversations obtained and published by the two websites indicate that Henderson may have provided the younger men, who appear to be possibly younger than 21, with alcohol and marijuana. The Facebook account cited by the bloggers has since been deleted.

Neither blogger has indicated how they obtained the mountain of information published last week. The editor of Exposed Politics, who asked not to be identified for fear of retribution, told Metro Weekly he received an anonymous tip alerting him to the story.

Zampogna would not comment on the grounds for Henderson’s termination or what legal action his client is considering, but did confirm that ACLJ had terminated Henderson’s employment.

ACLJ, which is located in D.C., was founded in 1990 by Robertson as a means to counter the American Civil Liberties Union. In recent years, ACLJ has argued a number of cases before the Supreme Court, including several cases regarding prayer in public schools and demonstrations outside abortion clinics.

Over the years, Robertson has repeatedly made anti-gay comments, including describing gay people as suffering from a sickness and accusing them of targeting children for recruitment. He has also advocated for discrimination against gay people, equating them with criminals. 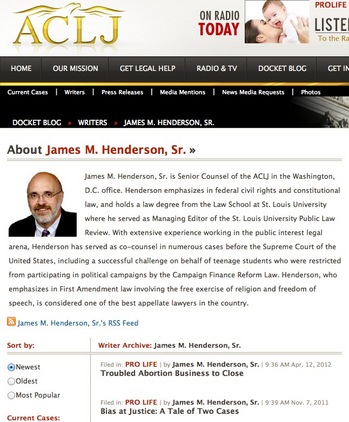 Although it does not appear Henderson worked specifically on any anti-gay cases during his time at ACLJ, the organization nevertheless remains an arm of Robertson’s broader social-conservative crusade.

For more than a week, ACLJ has refused to comment on Henderson’s termination. After the story began to percolate on the Internet, ACLJ scrubbed Henderson from its website, deleting his bio page and the multiple articles Henderson wrote during his years at the organization.

Although the group has attempted to erase evidence of Henderson’s employment, his name still appears on countless court documents along with Sekulow, chief counsel for ACLJ.

Only after Metro Weekly informed ACLJ that Henderson had attained a civil rights employment lawyer did the organization acknowledge his termination.

According to Mindy Hughes, director of public relations at Regent, Henderson was a part-time teacher and last taught at Regent during the spring semester of 2011.

Neither the ACLJ nor Henderson’s attorney have commented on the grounds for his termination. Zampogna did acknowledge that he has seen the reports on Exposed Politics and The Patriot-Ombudsman.