D.C.-reared singer-songwriter Alice Smith is getting back on track

”The ladies love me,” Alice Smith says after being asked about gay fans. And why is that? ”It’s because I’m sexy,” the singer-songwriter says with a laugh. ”I’m definitely a woman-friendly person.”

Actually, anybody, of any gender and orientation, would love Smith, given the opportunity. Smith’s music, as documented on her marvelous tour-de-force debut For Lovers, Dreamers and Me is rock-tinged Southern soul and pop, sweet and sultry. And her main instrument is a deceptively simple alto voice, used more for narrative efficiency than for showy effect: Only occasionally does Smith display the full, wondrous spread of her four-octave range. 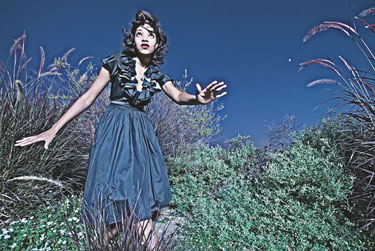 More people haven’t heard of the D.C.-reared, Grammy-nominated Smith because of what she calls ”a lot of different setbacks.” Specifically, the Brooklyn-based artist suffered a couple runarounds in the industry, most notably while under contract with major label Sony/Epic, which has continued to delay release of her years-ago completed sophomore album.

”It’s been six years since I’ve put anything out. It’s been a really interesting road,” Smith says. But now, Smith says, ”I’ve finally found a really nice company and a really nice situation. I’m confident that this is the final leg of the race” to a new album. Named after a new song on the set, She will be released early next year.

Smith says having a baby, a daughter turning 2 this month, has given her career a sense of focus she didn’t really have before. Smith explains she didn’t set out to make music her career; the English and history major was merely dabbling as a friend’s backup singer while in college in New York. ”Up until I got to Sony, everything just kind of happened organically,” she says. ”I wasn’t consciously trying to sign to a label, or make a record, or anything. I was just kind of along for the ride.”

Now? Smith is taking more initiative, including scheduling a few preview concerts well before the new album’s release. After helping to open the revived Howard Theatre earlier this year, Smith returns to perform at another of the city’s newest concert venues, The Hamilton. ”You want to do good at home,” she says about the pressure of a hometown crowd. ”Whenever I go [to D.C.], and there’s people there, somehow it’s always a little surprising, but it’s also always really exciting.”