The National Organization for Marriage released another horrible video this week that claims that “natural marriage” offers numerous benefits for society, while same sex marriage offers “no benefits for society as a whole.” The speaker then states, “In fact, it hurts us.” 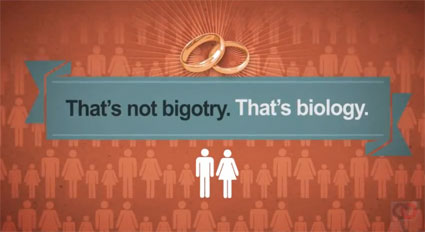 The slick motion graphic is voiced over with a British-sounding female who says that legalizing marriage for gay and lesbian couples will also hurt children. It then glosses over one of the key logical fallacies that befalls NOM’s entire argument: heterosexual couples are allowed to be married regardless of their ability and desire to raise children. NOM’s reply about childless unions is only this: “They are the exception not the rule.”

The fact is, NOM, that the issuance of marriage licenses is not related to child-bearing abilities. And the fact is, NOM, that civil marriages serve the purpose of declaring “next of kin” status between adults who are not already related, for the purpose of inheritance, health, financial and other legal matters in life and after death. To reserve certain protections, benefits and responsibilities for heterosexual couples is, and has always been, unfair. NOM is finally losing their arguments in both courts and legislatures, so it has turned its appeal to individual voters instead. NOM’s team uses scare tactics about children and education, and then they include their own appallingly bad lessons about history and biology.

The video makes other broad, inaccurate claims like the one about “religious freedom” somehow being “overruled.” Well, NOM, how about the religious freedoms of gay and lesbian people being overruled? Gay people have the religious freedom to believe that they are equally valuable members of society and deserve to be recognized as such by the government in marriage and all aspect of civil liberties.

Worst of all, NOM presents the notion that, “The law already treats everyone equally! Every citizen can marry someone of the opposite sex.”

If you can sit through this overtly bigoted compilation of NOM’s most misleading arguments, please do discuss your observations below. The good news continues to be that an increasing number of voters agree that same-sex couples deserve marriage rights. However, the majority of approval remains very slim. And the important referendum initiatives facing voters next month in Maryland and Washington state remain too close to call. Every vote is vitally important on this issue, and unfortunately, NOM knows that to be true, too.