With just 27 days to go before the presidential election, gay conservatives are seeking to solidify their support behind Republican presidential candidate Mitt Romney. 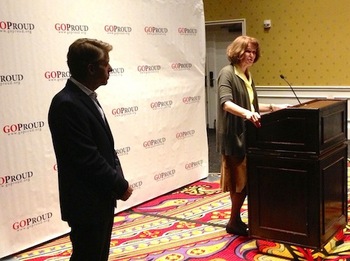 Following a debate performance last week that left supporters of President Barack Obama scrambling, new energy has been injected into the Romney campaign.

About 60 people gathered at D.C.’s Hotel Monaco Monday evening for GOProud’s “Unity” event. Bay Buchanan, a conservative commentator who is serving as a senior advisor to the Romney campaign, addressed the gathering and expressed confidence in the wake of Romney’s Oct. 3 debate performance.

“We are going to win this,” Buchanan declared, saying that while there may still be ups and downs in the four weeks before Election Day, momentum is on their side.

The scope of that poll was not lost on attendees at last night’s event, who, after several bad weeks for the Romney campaign, were feeling as confident as ever about the Republican nominee.

Although the event was organized by GOProud, there was no mention of LGBT issues. GOProud’s board endorsed Romney in June by a slim majority, citing the importance of the economy and job creation as key gay issues. Romney opposes marriage equality, civil unions that grant the same rights as marriage and a federal employment nondiscrimination act.

Those facts have not been lost on gay conservatives, who have emphasized the importance of economic policy as Obama, the first sitting president to openly support marriage equality, continues to court LGBT voters. Gay Romney supporters have accused the focus on social issues by Democrats as an attempt to distract from Obama’s failed record.

It was a reality Buchanan alluded to during her remarks on Monday, granting that they all may not agree on every position of a Romney presidency.

GOProud Executive Director Jimmy LaSalvia said Buchanan’s presence at the event was an important message from the Romney campaign.

“They know that it’s going to take everyone to come together to win in November,” LaSalvia said.

As GOProud continues to declare themselves the only gay conservative group to endorse Romney for president, speculation continues to swirl around whether Log Cabin Republicans will endorse the GOP nominee.

Since the group’s founding in 1977, only twice have they withheld their endorsement for the Republican presidential nominee. In 1992, LCR did not endorse George H. W. Bush, citing anti-gay rhetoric at the Republican National Convention. (Notably, a great deal of that rhetoric came from Bay Buchanan’s brother, Pat Buchanan, who declared a culture war was being waged in America.) In 2004 LCR did not endorse George W. Bush because of his support for a constitutional amendment banning marriage equality.

Although LCR Executive Director R. Clarke Cooper has repeatedly told Metro Weekly that an endorsement announcement would come before the October debates, no announcement has yet been issued. Last week LCR did release a list of congressional endorsements.

LaSalvia, who previously worked for LCR but left citing a leftward drift by the organization, would not speculate on LCR’s delay, but stressed the need for unity.

“It’s going to take everybody to help Mitt Romney win and that’s what we’re focused on,” LaSalvia told Metro Weekly.