Shining a Light on Question 6

It’s about 7 p.m. Saturday, Oct. 6. In the twilight, several people gather at a parking lot in Owings Mills, Md., awaiting instructions from Mark Patro, the evening’s organizer. Patro heads to his van and pulls out a number of large canvasses, all painted black, dotted with tiny lightbulbs spelling out one letter on each.

Patro counts his volunteers, hands a couple canvasses to each, and the group heads down the road toward on overpass above I-795. The Maryland Light Brigade is on the move. 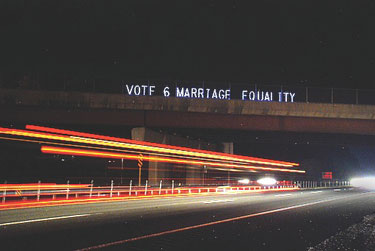 When the group arrives at the overpass, the volunteers flip a switch on each canvass, lighting up the letters. The message shines brightly through the dark night. Hundreds of passing cars can read it. ”Vote 6 Marriage Equality.”

Patro leaves the group to join the other drivers on the highway, but pulling over to the side of the road ahead of the overpass. He photographs the scene as a few passing drivers honk their horns in approval. Most do not.

”These are the people headed out of Baltimore County into [Carroll] County,” Patro explains. ”It’s a very conservative area of Maryland. But even here, there’s some support among people.”

Patro, the president of the Baltimore City chapter of Parents, Families and Friends of Lesbians and Gays (PFLAG), tells Metro Weekly he got the idea of illuminated campaigning from the ”Overpass Light Brigade” in Wisconsin, a group formed to oppose Gov. Scott Walker (R).

Patro says he combined his background in fine arts with his on-the-job experience as an engineer to help make the lighted signs, which he says will appear across various highways and overpasses throughout Maryland in the run-up to the Nov. 6 vote to determine whether Maryland’s marriage-equality law will take effect at the start of the new year.

”When I reached out to fellow PFLAG members, I received very little response from people who wanted to do canvassing, phone-banking or door-knocking,” Patro tells Metro Weekly. ”But people who are passionate about marriage equality wanted to do something else supportive.”

That’s exactly the sentiment expressed by Pat English of Baltimore County, a PFLAG mother who previously served as the chair of the Howard County chapter. She says she learned of the Light Brigade from Facebook, where the group has its own page.

”I’m a part of this because I feel I have to do something to get out and show my support for Question 6,” English says. ”I’m not a door-knocker. I’m not a person to make random phone calls. So I feel carrying my button on my person, on my handbag, I’ll get questions from people asking ‘What is Question 6?’ I can show my support that way, or by standing on a bridge, getting those honks, seeing those waves, which fills me with a sense that I’m accomplishing something, in a way that makes me more pumped to do it again.”

English, who is black, says she is angered by attempts to use race as a wedge issue to deny civil rights to LGBT people. She adds that most African-Americans with whom discussed Question 6 favor marriage equality.

”I get so angry when I hear black people talk about this, ‘Gay rights shouldn’t bring up the civil rights thing,’ because rights are rights, and gay rights are just as much civil rights as black rights,” she says. ”Some blacks think because you can see us and our struggle, and you can’t obviously see the struggle just looking at a gay person, that we can claim it. That’s absolutely asinine. It makes me furious that they think they can ‘own’ civil rights.”

In all, Light Brigade Maryland has 21 different events scheduled, 16 of which are similar to the Owings Mills event.

Patro says he frequently tries to partner with existing groups in areas the Light Brigade visits, usually PFLAG chapters, but has also worked with members of the Baltimore Ethical Society and Occupy Baltimore, as well as college and youth LGBT groups.

Patro says feedback has been positive, with several honks in support in more liberal areas closer to major cities. Some drivers have even stopped to ask about the group, and to show support for the participants. At the Federal Hill Light Brigade event, a reggae band playing at a nearby festival played Bob Marley’s ”Stand Up for Your Rights.” The group’s drummer later came up to shake hands with the demonstrators.

It’s the positive feedback, Patro says, that has many participants committing to more Light Brigade actions.

Judy Gaver lives in Carroll County, where she is a member of the Carroll County-Westminster PFLAG chapter. Gaver says she gets a ”wonderful” feeling when she participates in the Light Brigade.

”I just think it’s a great way to spread the word,” she says. ”It gives you a feeling of raw activism.”

John Riley is the local news reporter for Metro Weekly. He can be reached at jriley@metroweekly.com
← Previous Story Robinson Hearing Postponed
Next Story → Heritage and Identity