In a historic move, the nation’s largest military LGBT-rights organization has announced Allyson Robinson, a transgender woman, will be the group’s new executive director. 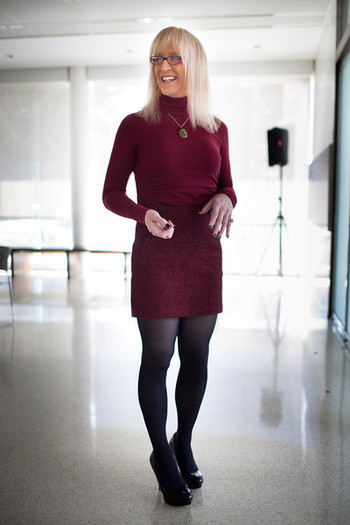 Servicemembers Legal Defense Network and OutServe, which will officially combine into one organization this weekend, announced Oct. 25 that Army veteran Robinson will lead the newly combined group, earning praise from LGBT-rights advocates.

A 1994 graduate of the United States Military Academy at West Point, Robinson previously served as deputy director for employee programs of the HRC Foundation’s Workplace Project. She has been married to her wife for 18 years and has four children.

In a statement announcing the placement, Robinson said she was honored to lead the organization into the “next phase of advocacy and action on behalf of our brave LGBT service members, veterans, and their families.”

“Until they are guaranteed equal opportunity, recognition, support, and benefits, our mission is incomplete. We cannot and will not leave them behind,” said Robinson.

BuzzFeed first reported the news of Robinson’s selection just after midnight Thursday, which appears to be the first time an out transgender person has been named the leader of a national LGBT organization.

In many ways, Robinson’s selection signals a shifting focus to the final stage of the fight for full LGBT equality in America’s armed forces.

Although 2011’s repeal of “Don’t Ask, Don’t Tell” opened the door for gay, lesbian and bisexual servicemembers, transgender Americans must continue life in the closet in order to serve their country.

Due to a medical regulatory ban, not only is evidence of transition therapy grounds for disqualification for potential recruits, so is openly identifying as transgender, which the Pentagon considers a psychiatric condition.

Transgender veterans who transition after leaving the armed forces face other obstacles as well. Upon discharge from the military, servicemembers receive a DD-214 form with their full name. Some transgender veterans who seek to change the name on the form, which is used to secure veteran benefits, are not always able to do so.

Although the Department of Veterans Affairs issued a directive in June 2011 providing health care for some transgender medical needs, such as hormone treatments, the VA does not provide sex-reassignment surgery.

Robinson signaled that during her time as executive director she will work to end the ban on trans servicemembers.

“We cannot stop until we reach the day when all qualified Americans who wish to wear the uniform of our armed forces have the opportunity to do so with honor and integrity – and without fear of discrimination or harassment – whether they are gay, lesbian, bisexual, or transgender,” Robinson said in a statement.

Moreover, Robinson said she would continue the fight to secure same-sex military couples benefits denied to them because of the Defense of Marriage Act.

“The repeal of ‘Don’t Ask, Don’t Tell’ taught us that to be victorious, we must fight inequality on multiple fronts — in the courts, on Capitol Hill, and in the public square,” Robinson said. “It’s time to pass the Respect for Marriage Act, revise laws that prevent the military from honoring the service of all of our nation’s men and women in uniform, and end marriage discrimination for our service members and their families once and for all.”

Although SLDN has been fighting DOMA in court since October 2011, Robinson has not laid out a specific strategy for securing transgender equality in the military, but suggested to BuzzFeed that increased visibility of trans servicemembers will be key.

“I think a crucial part of that strategy is ensuring that the stories of transgender servicemembers and veterans are being told,” Robinson told BuzzFeed’s Chris Geidner during an interview earlier this week.

Robinson’s selection has been praised by many as being key to achieving victory in the next stage of the movement.

According to SLDN’s outgoing executive director, Aubrey Sarvis, “Allyson will bring a new perspective and enthusiasm – as well as a deep commitment – as we enter the next phase of the fight for full LGBT equality in the armed forces.”

Josh Seefried, co-founder and co-director of OutServe, said he knew Robinson was right for the job from the moment they first met.

“As someone who graduated from West Point, deployed multiple times and has dedicated her life to advancing social justice, she will relate to service members and supporters and lead this organization to a new level,” Seefried said in a statement.

HRC President Chad Griffin also applauded Robinson’s selection, saying in a statement, “The LGBT rights movement is made stronger by the inspired appointment of Allyson Robinson as head of a critically important organization. As a West Point graduate, experienced officer and movement leader, she brings her extensive knowledge of the issues to this new assignment.”

A security official demanded 15-year-old Jamii Erway submit to a genital inspection after she triggered a "false positive" alert on a body scanner.

A transgender teenager's mother has sued the Transportation Security Administration for strip-searching her daughter at an airport back in 2019.

Jamii Erway, who was 15 years old at the time the incident occurred, was ordered to submit to a strip-search at Raleigh-Durham International Airport after she registered a "false positive" on the body scanner at the security checkpoint, triggering an alert.

Erway explained to a scanner operator that she is transgender, but the scanner operator would not repeat the scan. The TSA official, referred to in the lawsuit as "Jane Doe," told Erway she would have to have her genitals inspected in a private room.