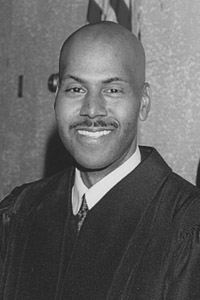 Judge William L. Thomas was nominated by Obama on Wednesday to the United States District Court for the Southern District of Florida.

In a statement, Obama called on the Senate to promptly consider his nominees as too many courtroom benches remain unfilled.

“These individuals have demonstrated the talent, expertise, and fair-mindedness Americans expect and deserve from their judicial system,” Obama said. “They also represent my continued commitment to ensure that the judiciary resembles the nation it serves. I am grateful for their willingness to serve and confident that they will apply the law with the utmost impartiality and integrity.”

A 1994 graduate of the Temple University School of Law, Thomas’s nomination marks the seventh out gay person nominated to the federal bench by Obama. Of the previous six nominated, three have been confirmed by the Senate and one — Edward DuMont — withdrew his nomination last November after waiting 18 months to receive his first committee hearing on his nomination.

In a statement released after Thomas’s nomination was announced, Nancy Zirkin, executive vice president of The Leadership Conference on Civil and Human Rights, said the nomination coming the same week the Senate is back in session is a reminder of the “judicial vacancy crisis” that has left more than 100 judgeships vacant nationwide.

“Today’s announcement also reflects the President’s historic commitment to advancing a diverse judiciary that looks like America,” Zirkin said in a statement. “If confirmed, these nominees would bring more women, minorities, and openly gay judges to courts to better reflect the nation they serve.”

In August, Obama also nominated out federal prosecutor Pamela Chen to the federal bench in the Eastern District of New York. Chen’s Senate hearing was held in September.

If confirmed, Thomas would become only the second out LGBT African-American to serve as a federal judge. The first, Deborah Batts, was appointed to the District Court for the Southern District of New York by President Bill Clinton in 1994.