”I’ve recently fallen in love with opera,” says Alan Paul, conceding, ”I’ve been on an obsessive, opera-going mission over the last year.” And he’s not being operatic about it: Traveling to New York 14 times in one year just to catch the Metropolitan Opera would surely match anyone’s definition of obsessive. He also recently ventured to several opera houses in Europe.

But despite how it sounds, Paul, associate director of the Shakespeare Theatre Company by day, is hardly letting his new artistic passion run wild and free, overtaking his other pursuits. Instead, it’s part of a larger master plan. ”I’m taking very active steps to build a career that takes me into opera as well as the theater,” he explains. 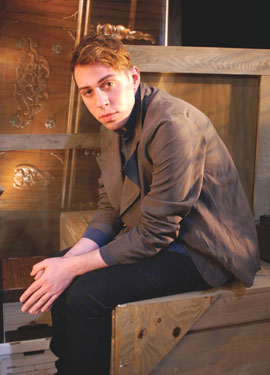 Paul took his first active step toward directing opera as far back as last April, when he directed three programs for growing contemporary opera company UrbanArias. The work for UrbanArias also led him to the InSeries, which is currently staging two one-act operas – Henry Purcell’s Dido & Aeneas and Manuel De Falla’s El Amor Brujo – directed by Paul and packaged together as the latest in the InSeries’s annual ”Pocket Opera” program, dubbed ”Love & Witchcraft.” Both operas feature local mezzo-soprano Anamer Castrello, a regular with the InSeries and also a familiar actor for GALA Theatre. In addition to a rich, expressive voice, Paul notes Castrello possesses ”a fiery temperament onstage, which makes you sit up in your seat, wondering what she’s going to do next.”

For Paul, the next thing to do is to complete his application, including his original concept for an opera, to compete for the European Opera Prize, intended to shine the spotlight on aspiring opera directors under age 35 and offering the grand prize winner a full-scale production based on his original concept.

Oh, and Paul says he’ll also continue his study of Italian – which he started because it’s the principal language of opera, of course.

He adds, ”I’m basically surging the operatic wave as much as I can because I love it.”’