With the start of the new year, same-sex couples will have access to legally sanctioned marriage in Maryland. This comes after the state already recognized same-sex marriages performed elsewhere, and after years of same-sex couples marrying in the Free State — albeit without the state’s legal imprimatur. It also comes long after Maryland added ”sexual orientation” to statewide antidiscrimination protections.

Expanding civil marriage to include same-sex couples, specifically, is apparently beyond what Matt Grubbs can accommodate in good conscience. 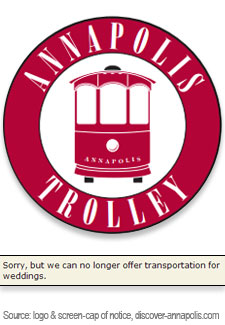 ”We used to do weddings until recently,” Grubbs wrote to a New Jersey couple inquiring about Grubbs’s Discovery Annapolis Tours’ trolley services for their upcoming Annapolis wedding, as reported by the Eye On Annapolis blog Nov. 30. ”But we’re a Christian-owned business, and we are not able to lend support to gay marriages. And as a public accommodation, we cannot discriminate between gay or straight couples, so we had to stop doing all wedding transportation.

”If you live in Maryland, you might contact your senator and three delegates in the General Assembly and request they amend the new marriage law to allow an exemption for religious conviction for the lay person in the pew. The law exempts my minister from doing same-sex weddings, and the Knights of Columbus don’t have to rent out their hall for a gay wedding reception, but somehow my religious convictions don’t count for anything.”

Requests for comment from Grubbs left with Discovery Annapolis Tours were not immediately returned.

Carrie Evans, executive director of Equality Maryland, the state’s primary LGBT-rights organization, says she believes this to be an insolated incident – particularly in that her organization has been fielding a stream of calls since the passage of Question 6 from businesses hoping to cash in on marriage equality. Question 6 was the referendum Maryland voters passed Nov. 6 to ensure the marriage law could take effect.

”We haven’t heard of any other companies doing this. If fact, it’s been the opposite,” says Evans, granting that Grubbs is well within his rights to stop offering his company’s services to wedding parties. ”They’re totally within their business prerogative – if they withdraw from all weddings.”

The Williams Institute, a think tank at the University of California, Los Angeles, School of Law, estimates that the first three years of marriage equality should generate $62.6 million in Maryland.