”When do I get to vote on YOUR marriage?”

That’s the question posed on a rainbow-bedecked T-shirt worn by one older, presumably gay, white man, captured in a group photo by Michael Lang. And ”Good Question” – as Lang’s caption reads – is just one of 40 pieces of politically inspired artwork now on display at Touchstone Gallery.

”We wanted to do something special for this month, because of the Inauguration and because all eyes will be on Washington, D.C.,” says the gallery’s director Ksenia Grishkova. ”Politics as UN-usual is not strictly a political show, it’s just [Touchstone] artists who came up with ways to express their opinions and their feelings about certain issues that are on everybody’s mind right now.” 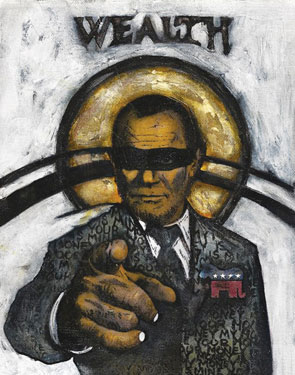 I Want Your Money

(Photo by By Anthony Dortch)

The gallery, one of the oldest in D.C., generally has three exhibits going at once, and this month also features two solo exhibits with works by Harmon Biddle and Judith Lavender.

But it’s the group political show that’s generating the most buzz. Naturally, some pieces are more pointed and provocative than others, such as Anthony Dortch‘s ”I Want Your Money,” depicting an image of a masked Uncle Sam pointing at the viewer. Then there’s Janathel Shaw’s sculpture ”Salt N Pepper N-Shaker,” located in the gallery’s center. Says Grishkova, ”People are usually kind of drawn to it right away, they want to see what it’s all about.” Turns out, it’s a lawn jockey salt-and-pepper shaker set – lawn jockeys being the grossly stereotypical and offensive sculptures that were once common in the South. Shaw was provoked by the late Sen. Jesse Helms, who opposed the National Museum of African American History and Culture. ”Once Congress gives the go ahead for African Americans,” Helms bellowed, ”How can Congress then say no to Hispanics, and the next group, and the next group after that?”