By John Riley on January 30, 2013 @JohnAndresRiley

If Virginia legislators take action this week, “living in sin” with one’s boyfriend or girlfriend will be a step closer to legalization in the commonwealth. 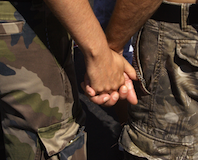 The Virginia Senate is expected to pass a bill Thursday that would repeal a section of the Code of Virginia dating back to the 19th century that outlaws unmarried cohabitation.

The bill, SB969, introduced by Sen. Adam Ebbin (D-Alexandria, Arlington, Fairfax counties) repeals a section of the law that, although rarely enforced, makes people not married to each other who “lewdly or lasciviously associate and cohabit together” guilty of a Class 3 misdemeanor, which is punishable by a fine of up to $500. That punishment is the same as the punishment for “open and gross lewd and lascivious behavior,” such as public sex or nudity. Under the law, a second or subsequent conviction for cohabitation is considered a Class 1 misdemeanor, which is punishable by up to 12 months in jail, a fine of up to $2,500, or both.

While the existing law makes no reference to sexual orientation, it also applies to same-sex couples, regardless of marital status, due to Virginia’s Marshall-Newman Amendment, which prevents the state from recognizing any form of same-sex partnership.

Originally, the bill struck out the clause relating to unmarried cohabitation but kept the punishment for “open and gross lewd or lascivious behavior.” But a committee substitute was recommended and adopted that repealed the entire section of the law.

SB969 got a boost Monday when it passed out of the Senate Committee for Courts of Justice on a 15-0 vote Monday. It has since been read twice before the full Senate and engrossed, setting it up to pass the upper chamber following its third and final reading Thursday.

The bill will then be sent to the House of Delegates. If passed there, it head to Gov. Bob McDonnell (R) for his signature into law.

McDonnell, who came under fire from opponents during his 2009 gubernatorial run for a Regent University graduate thesis that postulated that Republicans should shield heterosexual two-parent families from the effects of abortion, feminism, welfare and “cohabitors, homosexuals or fornicators,” said he supports ending the cohabitation ban in a Tuesday radio interview on WTOP’s “Ask the Governor” monthly series.