As gay rights take center stage, some wonder why the popular former president is seemingly in the wings

There were high expectations for former President Bill Clinton when he walked out onto the blue-carpeted stage at the Democratic National Convention in Charlotte, N.C., in September.

The former president had become a staunch defender of President Barack Obama, leaving behind perceived animosity developed over a long and brutal primary fight between Obama and Hillary Clinton in 2008. With Hillary Clinton serving as secretary of state and Obama in a heated race against Republican presidential candidate Mitt Romney, all eyes were on the great communicator Sept. 5, with supporters hoping Clinton could lend his charisma and fight to a president sometimes perceived as distant.

”We’re here to nominate a president, and I’ve got one in mind,” Clinton said to cheers from the packed Time Warner Cable Arena. 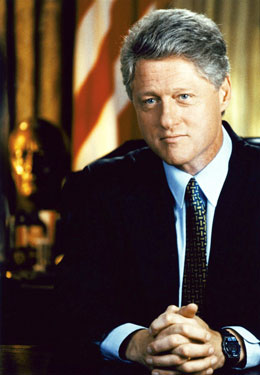 For 50 minutes Clinton spoke about the economy in a policy-heavy speech that ran 10 minutes longer than Obama’s own speech the following night. Often veering from his prepared remarks, Clinton dissected Romney’s plan for the economy in a style that reminded many what made Clinton one of the most successful politicians of the late 20th century. Observers declared Clinton’s speech a rousing success, but for LGBT Americans there was no denying what was left unsaid.

Considered a pillar of the modern Democratic Party, two of the most lasting legacies of Bill Clinton’s presidency were anti-gay policies that have taken nearly two decades to undo, and whose undoing has been largely assisted by the president Clinton went to Charlotte to help re-elect.

Despite campaigning a year earlier on the promise that gay and lesbian Americans would at last be allowed to serve openly in the American military, Clinton and Congress approved ”Don’t Ask, Don’t Tell” in 1993 as a compromise to the full ban on gay servicemembers that existed when Clinton entered the White House. Gay people would be allowed to serve under Clinton’s compromise, but by sharing their sexual orientation they faced discharged. And discharged they were, with more than 14,500 LGB servicemembers fired under the discriminatory ban before its repeal in 2011.

”He probably should have mentioned it,” gay retired Army Gen. Keith Kerr told Metro Weekly in a phone interview from his California home shortly after Clinton’s speech last September.

The 81-year-old Kerr, who worked for years to repeal DADT and was a member of Hillary Clinton’s 2008 campaign for president, said acknowledgment by Bill Clinton of the policy he signed into law could have sent a strong message more aligned with a party convention that highlighted Obama’s repeal of the discriminatory policy multiple times.

Although Kerr said he initially supported DADT as a compromise when it was implemented in 1993, he quickly grew wary of its misuse as it became a ”weapon of vengeance anytime someone had a gripe against a gay servicemember.”

Sue Fulton, an out gay veteran and graduate of West Point, added that Bill Clinton is probably sick of being blamed for DADT and the corner he was pushed into by congressional Republicans.

”Too many people in the gay community blame him for a policy that was in principal a decent compromise. The problem was that the policy wasn’t implemented as promised,” said Fulton. ”Perhaps he’s more culpable for DOMA than DADT, but it’s hard now to remember the political climate of that time and how much things have changed.”

Indeed, while the political climate of the 1990s has been blamed more than Clinton for the implementation of DADT, it is his signing of the 1996 Defense of Marriage Act for which he has faced continued criticism.

It was shortly after midnight, Sept. 21, 1996, when Clinton signed DOMA in what was a highly expansive and intrusive federal ”power grab” that forbid federal recognition of same-sex marriages in all states.

In a statement released one day before signing DOMA into law, Clinton hinted at his qualms with the bill.

”Throughout my life I have strenuously opposed discrimination of any kind, including discrimination against gay and lesbian Americans,” Clinton said. ”I have long opposed governmental recognition of same-gender marriages and this legislation is consistent with that position.”

In the same statement, Clinton affirmed his support for the Employment Non-Discrimination Act and urged Congress to pass that legislation.

”I also want to make clear to all that the enactment of this legislation should not, despite the fierce and at times divisive rhetoric surrounding it, be understood to provide an excuse for discrimination, violence or intimidation against any person on the basis of sexual orientation,” Clinton said. ”Discrimination, violence and intimidation for that reason, as well as others, violate the principle of equal protection under the law and have no place in American society.”

It was not popular to oppose DOMA in 1996. Congress approved the bill overwhelmingly with only 14 Democrats voting against the bill in the Senate. Although the act was largely meaningless at first, that changed as the fight for marriage equality expanded. When Massachusetts became the first state to issue marriage licenses to same-sex couples in 2004, those couples were denied more than 1,000 benefits enjoyed by married straight couples because of DOMA.