The Washington National Cathedral, among the most prominent Episcopal churches in country, announced Tuesday that, effective immediately, same-sex weddings may be celebrated at the cathedral. 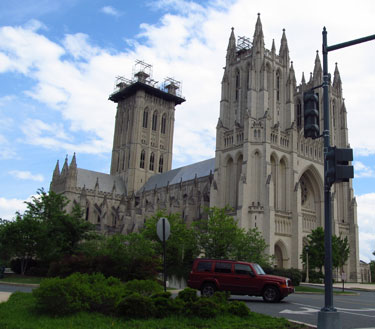 ”For more than 30 years, the Episcopal Church has prayed and studied to discern the evidence of God’s blessing in the lives of same-sex couples. It is now only fitting that the National Cathedral follow suit. We enthusiastically affirm each person as a beloved child of God – and doing so means including the full participation of gays and lesbians in the life of this spiritual home for the nation.”

In accordance with the canons of the Episcopal Church, the cathedral will celebrate same-sex marriages using a rite adapted from an existing blessing ceremony approved in August 2012 by the church at its General Convention.

Although some Episcopal clergy have provided private blessings to same-sex couples since the 1960s, the church had no official practice until its 2009 General Convention, when the Church said bishops may provide ”generous pastoral response” to same-sex couples, particularly in states that had legalized civil unions or marriage equality. Following the 2012 convention’s approval of a rite for same-sex marriages, bishops who oversee various dioceses within the church were allowed to make their own decisions whether to celebrate same-sex marriages.

Following the legalization of same-sex marriage in the District in 2010 and Maryland in 2012, the Rev. Mariann Edgar Budde, bishop of the Episcopal Diocese of Washington, decided in December to allow the celebration of same-sex marriages in the diocese, which covers the District, and Montgomery, Prince George’s, Charles and St. Mary’s counties in Maryland. In response to the bishop’s decision, individual faith communities, such as the National Cathedral, were then allowed to decide whether to adapt the marriage rite to include same-sex couples, which Hall, in his role as dean of the cathedral, helped to implement.

Because the weddings are conducted as Christian marriages in the church, at least one person in the couple must have been baptized. As a general rule, only couples directly affiliated with the cathedral, such as active members of the congregation, alumni of the cathedral schools, donors who make regular and significant contributions to the cathedral, or those judged by the dean to have played an ”exceptional role” in the life of the nation are eligible to wed in the cathedral. This applies to both same-sex and opposite-sex couples.

”Today marks another milestone in the Episcopal Church’s embrace of all God’s children, including LGBT people,” the Rev. MacArthur Flournoy, deputy director of HRC’s Religion and Faith Program, said in a statement. ”Today, the Church sent a simple but powerful message to LGBT Episcopalians – you are loved just the way you are, and for that we embrace you.

”The Episcopal Church is one of a growing number of denominations to see a new day in the intersection of faith and sexual orientation and gender identity,” Flournoy continued. ”This is not only good for LGBT people, it is good for the soul of the church.”